UN fears up to 750,000 Iraqis could be displaced in western Mosul offensive

Iraqi troops have shifted their focus from the eastern to the western portion of the city of Mosul, which remains under the control of IS fighters. UN officials are struggling to ready emergency aid for civilians. 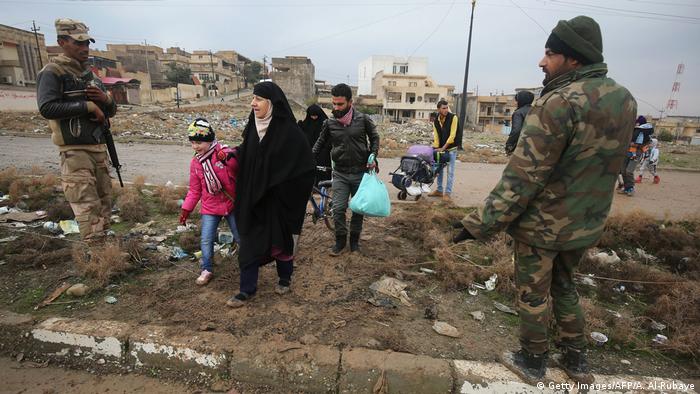 The United Nations said that the 750,000 Iraqi civilians who remained under the control of militants with the so-called "Islamic State" (IS) group in the western half of Mosul could face massive displacement once Iraqi troops begin the battle to retake this section of the city.

"We fear for their lives," Lisa Grande, UN coordinator for Iraq, said in a statement released on Tuesday. The organization's aid workers have been rushing to set up camps and provide supplies for what could be an exodus of hundreds of thousands of beleaguered Iraqi civilians.

The IS group has "continued to attack those fleeing or attempting to flee areas that are controlled by it," UN human rights spokesperson Ravina Shamdasani stated.

The UN has long accused IS of committing war crimes. According to Grande, IS fighters used civilians in western Mosul as human shields and turned hospitals into military bases. The militant group, which launched its "caliphate" from the city in 2014, also withheld food and medicine from civilians. Civilians who have remained in Mosul face perilous conditions as well as skyrocketing prices, supply shortages and a lack of heating, forcing some to burn furniture to stay warm, the UN reported. 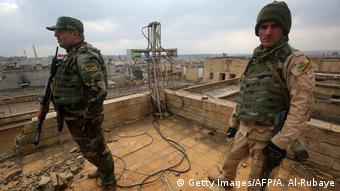 Iraqi forces anticipate a fierce fight for Mosul's western half

The humanitarian worries have coincided with the Iraqi army's pivot from the eastern to the western bank of the city bisected by the Tigris River.

Just 100 days after the start of the US-supported campaign to retake Mosul from IS, a government commander told local media on Monday that the last militant stronghold in the eastern half of the city had been captured.

The western bank could prove a trickier area to bring under Iraqi control because it contains a maze of narrow streets that prohibit the passage armored vehicles, enabling IS fighters to hide among civilians. According to Iraqi state TV, the army has constructed temporary bridges allowing troops to cross from the eastern to the western half of the city. IS explosions and military air strikes have destroyed the original bridges.

Approximately 3,300 IS militants have been killed in the fighting, the Iraqi army said, in comparison to the 5,000-6,000 estimated inside Mosul at the campaign's start in October 2014. The UN has estimated that over 160,000  civilians in Mosul have already been displaced.

Battle for Mosul is far from over

As the liberation of Mosul from the "Islamic State" group gathers pace, Iraq's second city has been coming back to life with remarkable speed. DW's Florian Neuhof reports from neighborhoods of freshly shaven men. (18.01.2017)