Life returns to Mosul neighborhoods freed from IS | Middle East | News and analysis of events in the Arab world | DW | 18.01.2017

As the liberation of Mosul from the "Islamic State" group gathers pace, Iraq's second city has been coming back to life with remarkable speed. DW's Florian Neuhof reports from neighborhoods of freshly shaven men. 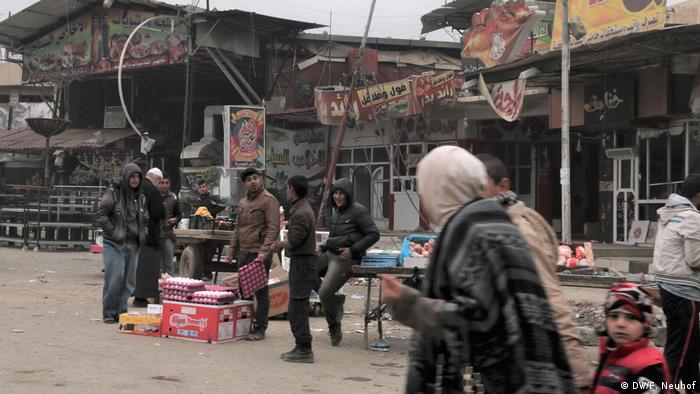 Making the best out of a difficult situation

On a street just off the main road leading to the last neighborhoods in eastern Mosul still under "Islamic State" (IS) control, people throng around produce-laden handcarts. Mortar rounds come crashing into the area with alarming frequency, exploding with a sharp, dry bang. The insurgents have made a habit of bombarding areas no longer under their control and consider anyone who failed to retreat with them infidels worthy of death. The shoppers pay no heed as they stock up at the market. Fruit, vegetables, eggs and cooking gas feature prominently on the shopping list: cheap essentials for the city's cash-strapped inhabitants.

The Iraqi military launched its campaign to end IS reign in Mosul on October 17, and the first troops entered the city on the east bank of the Tigris early in November. Since then, the front line has rolled through the eastern half of Mosul, exposing its inhabitants to the fighting while pushing back the insurgents. Since the start of the year, reinforcements and new tactics have quickened the pace of the offensive, and a string of neighborhoods have been liberated in quick succession.

Among them is Zuhour, where the street market sprang to life within days of the liberation. As the government and international aid agencies have failed to deliver sufficient supplies to the city, food, fuel and other goods are brought in and sold by merchants. A supply chain leading from the nearby Kurdish region right into the heart of the city was swiftly created, reconnecting Mosul with the world outside IS influence after over two years. 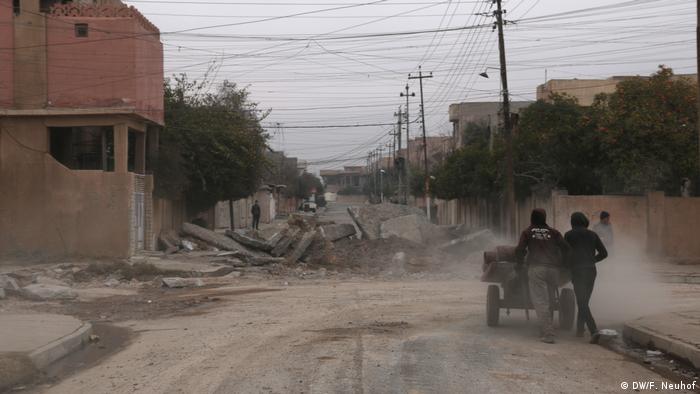 Zuhour is less than a kilometer from the frontline. Continue down the main road a little longer, and concrete blast walls stop the traffic from proceeding toward the Nineveh ruins, the remains of the Assyrian King Sennacherib's capital, now a stretch of no man's land. Behind it lies the ever-shrinking "Caliphate."

But this has not stopped the neighborhood from coming back to life.

Cars drive on roads pockmarked with craters after earthen barricades and blast walls have been hastily cleared. Already, bulldozers are filling in holes punched into the tarmac by IS suicide car bombs or mines known as improvised explosive devices (IEDs). Children play in front of facades riddled with bullet holes and next to collapsed houses that are all that is left of IS positions destroyed by airstrikes. Clean-shaven men chat with their neighbors. Gone are the bushy beards that the terror group forced them to grow.

Back to cigarettes and cellphones

Zuhour is not the only neighborhood that's been rejuvenated. In Gogjali, the first district to be retaken by the Iraqi military, a market has long been selling goods to people coming from the liberated areas. 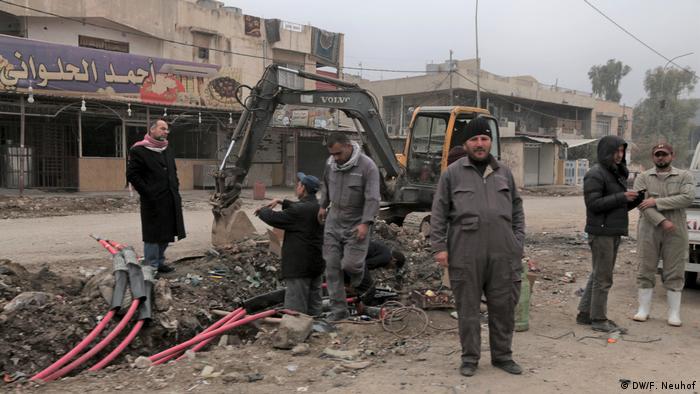 On an unpaved square next to the road, Mosul's inhabitants reacquaint themselves with the small luxuries they were deprived of after IS stormed the city in June 2014. Cartons of cigarettes are stacked high, mobile phones and SIM cards are displayed on wooden boxes, and a container has been fashioned into a rudimentary tea house where men sit and smoke water pipes.

Smoking had been strictly prohibited by the insurgents, who enforced a hard-line version of Islam, and phones were confiscated to prevent information from leaking out of the city. With IS now penned back at the river and unable to fire mortar rounds into Gogjali, people are relaxed as they roam the market in search of a bargain.

Mosul's economy had stalled under IS rule, and the city's many government employees were deprived of their salaries. This has left inhabitants with little money to spare.

"Life has returned back to normal. But we received no salary under Daesh [the Arabic name for IS], and we are still not receiving a salary now," said Ziad Ahmed, a 41-year-old civil servant, as he carried his shopping from Gogjali to the adjacent neighborhood of Al Quds.

The vendors also noted the lack of purchasing power.

"People don't have a lot of money; they buy the cheap phones," said Jassem Mohammed, who manned a stall selling mobiles, SIM cards and phone credit.

The supplies trucked in from Kurdish territory are unloaded at Gogjali, where merchants buy them in bulk and transport them further into the city.

After the onset of battle, food had become increasingly scarce.

As soon as parts of the Hay Sumer neighborhood were liberated last Tuesday, residents walked to the neighboring Palestine district in search of food. By late afternoon, before they found time to shave their beards, a steady stream of men was walking back along the road connecting the two areas, carrying big trays of eggs and bags of vegetables.

In other ways, Mosul is still desperately lacking.

In the Shukak neighborhood, bordering Gogjali, Abdul Ahmed stood in his family home. The house next door had been used as a base by IS and was hit by a coalition airstrike. The missile had pierced the roof and devastated the interior, and the unmistakable stench of death lingered over the rubble.

Abdul discovered that the explosion had also collapsed the back section of his house when he and his family returned after staying with relatives during the fighting. The family has no money to repair the building, and construction materials are in short supply. 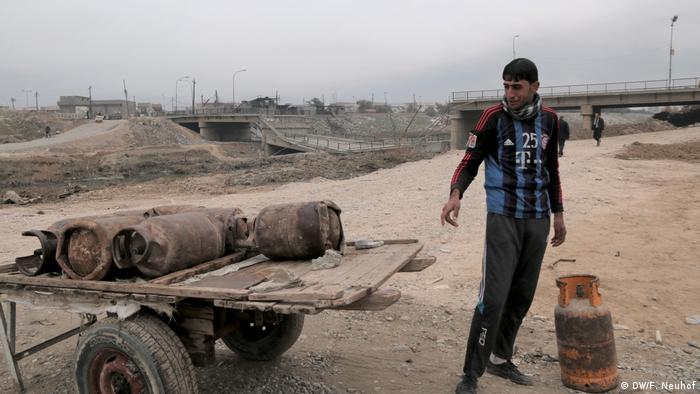 Mosul's residents are showing resilience in the face of adverse conditions

Abdul is hoping for government support to rebuild their home, but he has bigger worries still. The mental condition of his handicapped son Ali has deteriorated, and Abdul is still not able to buy the medicine the 11-year-old needs.

"His condition got worse after we could no longer buy his medicine when Daesh took over, and we couldn't take him to his doctor, who fled the city. It got worse again from stress when the battle began," he said.

Kurdish authorities do not permit Mosul residents to travel to the autonomous region, and medicine is not getting into the city yet.

Other obstacles on the road to normality also remain: The electricity supply has not been restored, with any generators the only source of power, and the water mains on the east bank have been destroyed.

As Mosul shows its resilience, it is also a city in need.

The Bronze Age city in Iraq gifted to archeology by drought 13.06.2022

Extreme drought in Iraq have given German and Kurdish archaeologists the unique chance to examine an ancient Bronze Age city, Zachiku. It was a race against the clock.