Civilian casualties soared in Iraq in 2016

The year 2016 proved to be a violent one for Iraq. A nongovernmental organization reports that thousands of civilians were killed last year. 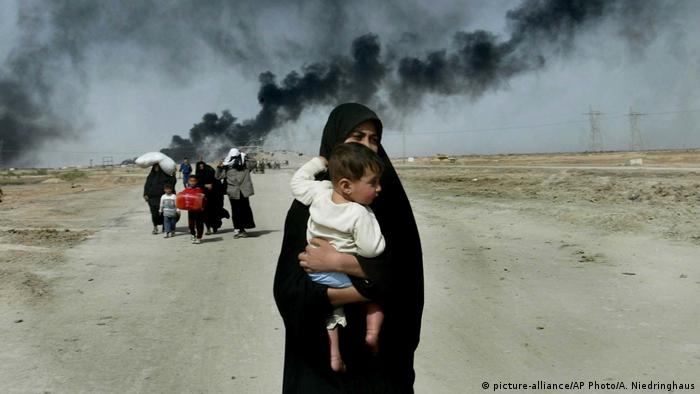 It was a bloody conclusion to a bloody year: A suicide bombing at a busy market in the Al-Sinek district in Baghdad killed 27 people on New Year's Eve and injured over 50.

Iraq had not seen peaceful times since the US invasion in 2003. Violence was still commonplace in 2016. According to a report drawn up by the project "Iraq Body Count"(IBC), in the past year, a total of 16,361 civilians were killed in the country. Even though the number of civilians killed has declined compared to previous years (17,587 in 2015 and 20,218 in 2014), the civilian death toll ranged between 4,000 – 5,000 people in the years prior to 2013  - in other words, the numbers are still relatively high. "An average of more than 1,300 civilians were killed in violence every month, the main exception being the September low of (935) which was however immediately followed by a peak of more than double that in October (1,969)," the report stated. Over two-thirds of the victims were male. Women and children each accounted for 10 percent of civilian deaths.

A hotbed of violence: Mosul

Geographically, the violence is not spread equally throughout the country. Almost half of the civilian victims, 7,431 people, were killed in Ninevah province, where Mosul, with a population of approximately one million, is situated. Deadly violence had been most significant in the northern city of Mosul and surrounding areas, the authors write in their report. In the Iraqi capital, Baghdad, 3,714 civilians were killed, followed by Anbar province with 1,742 and Tameem with 1,085. Execution as a cause of death

In the past year, "Islamic State" (ISIS or IS) lost a great deal of the Iraqi territory it had once controlled. With the help of Shiite militias and the US air force, Iraqi forces helped many cities drive out the jihadis. Nonetheless, "IS" is responsible for around two-thirds of civilian deaths. Around 2,000 civilians were killed in the air attacks carried out by the US-led coalition against "IS," which means an additional 500 people compared to the previous year. However, IBC could not determine the cause of around 4,400 civilian deaths.

The bloody attacks always draw attention to Iraq. One particularly shocking attack was the Karrada bombing in Baghdad at the beginning of July, when 324 people lost their lives. It was the worst attack in the history of the city. The majority of the civilians killed in the past year, 7,170, was not killed in attacks but was executed. Some 6,363 of these victims were executed by "IS." What is especially frightening is the fact that more than 200 children were also executed.  The number of suicide attacks nearly doubled to 1,664 compared to the previous year. Around 2,900 civilians died in air attacks and under fire.

How the IBC works

The activists John Sloboda and Hamit Dardagan developed the Iraq Body Count project (IBC). The organization is made up of volunteers in Great Britain and the USA. The figures in the reports are not estimates; they are a collection of documented cases. The organization obtains data from media coverage, NGOs, eyewitnesses, official statistics and government statements. On their website, the activists publish all the data that explains the figures. The IBC thus provides the most reliable record of civilian casualties in Iraq.

According to United Nations reports, 6,878 civilians were killed last year, but the UN points out that the victims in Anbar were not included in the statistics for the months of May, July, August and December.  The UN does not publish information about its sources.