The liberation of Mosul would effectively end the "Islamic State's" key territorial hold in Iraq. But even once the western half of the city is liberated that won't be the end of the militants. 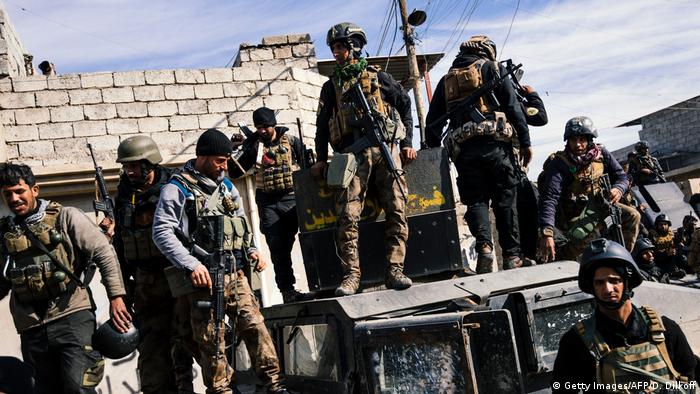 Residents of eastern Mosul held up their children and took selfies with Iraqi counter-terrorism commander Lieutenant General Abdul-Ghani al-Sadi after his men cleared the so-called "Islamic State" (IS) fighters from their neighborhoods.

But his tour on Saturday of homes once occupied by militants was a reminder of the dangers ahead as security forces prepare to extend their offensive against the Sunni militants into western Mosul.

Flanked by bodyguards in the Mohandiseen neighborhood, Sadi got a firsthand view of IS's meticulous planning and reign of terror as he moved from house to house, greeted by locals as a hero.

In one home, he found a set of bomb-making instructions and a large bucket filled with screws that were packed into explosives to kill and maim. Beside the leaflets lay a pair of industrial rubber gloves, wires and detonators.

He also found a thick book that described how to use Russian machine guns. Militants were said to be well-versed on how to employ anti-tank missiles.

Subsequently, he was among a group of Iraqi officers that had gathered on a balcony of Mosul's Nineveh International hotel – where they could look out at the Tigris River.

A little more than three months ago his soldiers were 45 kilometers (28 miles) away in a cluster of desert villages on the edge of Nineveh plain.

"Our message to the rest of Mosul's residents is that victory is near," Asadi said. His comments came during a celebratory tour after the city's east was declared largely liberated.

Amir Musawy on the Iraqi offensive to retake Mosul

Iraqi forces made halting progress at first, but sped up over the past month as they closed in on the river that essentially divides Mosul into eastern and western halves. But their momentum is unlikely to be sustained and the city's western half could be a more difficult fight.

Western Mosul has many narrow streets and alleyways that tanks and large armored vehicles cannot drive through.

Jihadis are expected to put up a fierce fight to hold on to their last stronghold in Iraq.

"We expect to enter the west in the next few days," said Sadi, shortly after tearing down an IS poster in anger.

Mosul is the largest city held by IS across its once-vast and self-declared caliphate in Iraq and neighboring Syria. It has been occupied by the group since its fighters drove out US-trained Iraqi soldiers in June 2014.

The fall of the city would mark the end of the Islamic caliphate, but the militants are widely expected to respond with an insurgency in Iraq and attacks in the West.