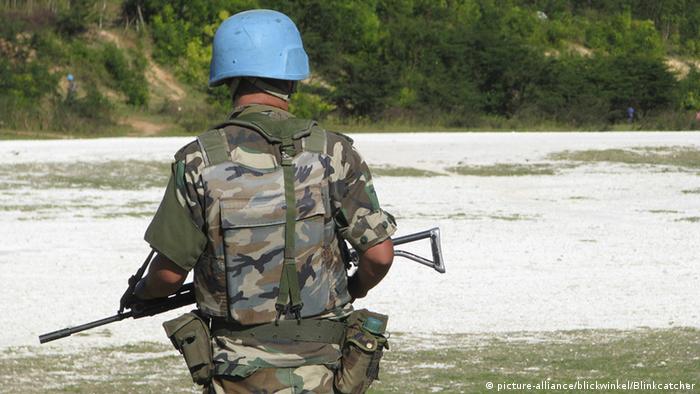 Making good on a 2017 vote, on Tuesday the UN Security Council ended its 15-year mission to stabilize Haiti, leaving a mixed legacy in a country that has entered a fifth week of anti-government protests. The UN first sent peacekeepers after the overthrow of President Jean-Bertrand Aristide by the army in 2004 under the pressure of a popular uprising. In 2017, the United Nations replaced those soldiers with a police mission to train Haiti's forces, gradually reducing the number of officers from 1,300 to 600 and now to zero, with a scaled-down political operation to remain.

Haiti's current uprising grew in late August, with President Jovenel Moise reported to have siphoned off petrol funds during a national fuel shortage as the inflation rate reached over 17%. The response has left at least 20 people dead and more than 200 injured. Schools sit shuttered.

"The protracted multidimensional crisis with which it has been contending since July 2018 shows little sign of abatement or resolution," UN Secretary-General Antonio Guterres wrote in a report released Tuesday. "I urge all actors to set aside their differences and particular interests to work together to overcome the increasingly preoccupying situation," he added.

Read more: When access to electricity is a feminist issue

President Moise refused to give in to protesters, instead proposing talks — a proposition that the opposition immediately refused, calling his pitch "not credible" and urging more protesters to the streets. Moise said he would only relinquish power through elections.

"You gave me a mandate," the Haiti Press Network news agency quoted Moise, who took office in 2017 following a dubious election, as saying. "The constitution determines how it will end." Haiti's caretaker government has postponed October's legislative elections indefinitely.

Thousands recently marched on the United Nations in Port-au-Prince to demand that the UN stop supporting Moise. On Tuesday, the United Nations released a statement citing Jean-Pierre Lacroix, the under-secretary-general for peace operations, as saying the mission had fostered a better environment for democratic processes to take root, and that the country required more political solutions, as well.

The United Nations and aid organizations have faced criticism for slow reconstruction efforts and failing to coordinate with the government and Haitians.

A cholera epidemic that killed 10,000 people broke out after peacekeepers accidentally dumped infected sewage into a river following the 2010 earthquake, which killed more than 300,000 people. The UN hasn't accepted legal responsibility for the outbreak, but, stepping down as secretary-general in late 2016, Ban Ki-moon apologized for the organization's role and announced a $400 million fund to help affected Haitians. The UN Haiti Cholera Response Multi-Partner Trust Fund has raised $10.5 million (€9.5 million) — and spent a quarter of that.

Several Haitians have come forth with accounts of sexual abuse by UN peacekeepers. In 2011, Uruguayan President Jose Mujica apologized after an 18-year-old reported that UN peacekeeping troops from the Latin American country had raped him. A year later, a military court in Pakistan found two UN peacekeepers from the South Asian country guilty of raping a 14-year old Haitian boy.