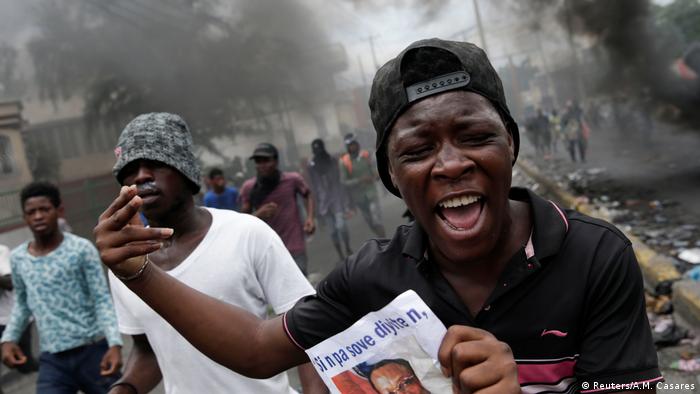 Thousands of Haitians marched through the capital, Port-au-Prince, on Friday as they demanded the removal of President Jovenel Moise.

Demonstrators headed for the UN headquarters in the city with placards emblazoned with the words "Resignation Jovenel" and "Jovenel Moise must leave now," calling on the United Nations to disown the president. Friday's march comes after weeks of similar protests.

Security forces used tear gas on protesters in an attempt to break up the unrest, the news agency Haiti Press Network (HPN) and Radio Metropole reported.

At least two people were shot and there were unconfirmed reports of deaths as police in riot gear blocked the main entrance to the capital's airport.

'The people are suffering'

Carlos Dorestant, a 22-year-old motorcycle driver, told The Associated Press that he witnessed a man next to him shot as protesters dismantled a barrier near the UN building.

"We are asking everyone in charge to tell Jovenel to resign," he said, wearing a bloodstained T-shirt. "The people are suffering."

According to HPN, the Haitian human rights group RNDDH has reported at least 15 fatal shootings during the last two weeks of September, as authorities battled against protesters.

The economy has been severely affected by the ongoing protests, 2 million children are unable to attend school and badly needed aid has been suspended, especially to rural areas. Supplies of gasoline, food and water are running short in some areas.

However, the US and the United Nations have yet to give up their support for Moise. Gabriel Fortune, mayor of the city of Les Cayes west of the capital, said Moise was contemplating resigning but that he would prefer to hold early elections.

"We will continue [our protests] until Jovenel leaves office," said Senator Sorel Jacinthe, a former ally of the president.

Haiti is seen as the Western Hemisphere's poorest country. It is largely dependent on foreign aid, and suffers from high levels of corruption and crime.

Thousands of demonstrators denouncing corruption have called for the resignation of President Jovenel Moise in further protests over reported misuse of funds. He formerly headed a firm under scrutiny by state auditors. (10.06.2019)