Thousands of demonstrators denouncing corruption have called for the resignation of President Jovenel Moise in further protests over reported misuse of funds. He formerly headed a firm under scrutiny by state auditors. 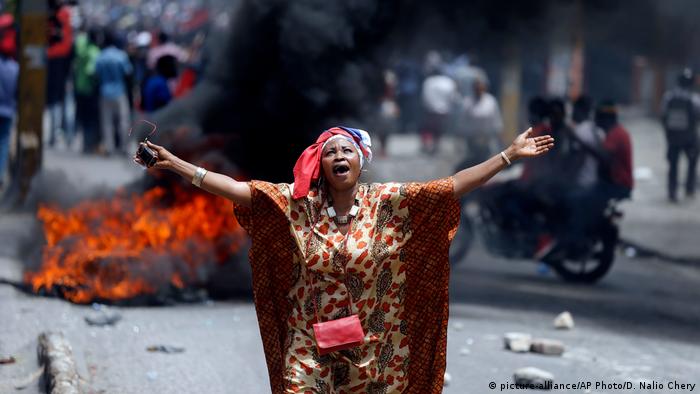 Protesters burned tires and threw stones during Sunday's march in Port-au-Prince, blocking roads and bringing much of the Haitian capital to a standstill as they called for President Jovenel Moise to step down. At least one person was reported killed.

Many stores and gas stations were closed, and travel between some cities was disrupted. Police set up barricades near the presidential palace and fired tear gas at demonstrators.

The protesters are demanding further investigation into the fate of funds from subsidized Venezuelan oil shipments under the Petrocaribe program. Previous investigations had resulted in parliamentary inquiries in 2016 and 2017.

Last week, judges of the High Court of Auditors laid out a litany of examples of suspected corruption and mismanagement in a 600-page report. One involved the state granting contacts to two firms — with the same tax number and staff payroll — for the same road-repair project.

One of the contractors, Agritrans, was formerly headed by Moise until his election as president in 2017. It received more than 33 million gourdes (€620,00/$700,000 at the time) to do the road work, despite being nothing more than a banana farming venture.

Petrocaribe, in decline because of Venezuela's political and economic crisis, was designed to benefit Caribbean and Latin American nations through discount prices.

In exchange for backing Caracas at regional forums against the US, Haiti recieved half of its Venezuelan oil as a loan repayable at low rates over 25 years. Earlier this year, Haiti was forced to buy oil on the global market, leaving power stations without affordable fuel and unable to deliver electricity.

In May, much of Haiti's population was restricted to just three hours of electricity a day. Shops have struggled, people have been unable to get to work or to school, and hospitals have been forced to rely on backup generators.

Haiti ranks as the poorest country of the Americas, with 60% of its population of 11 million living below the poverty line. Partially collapsed buildings, damaged during Haiti's devastating 2010 earthquake, still line many blocks of downtown Port-au-Prince.

Crises and disasters threatened more than 132 million people in 2018, and many of them hardly made the headlines. The Care aid organization looks at humanitarian issues that were underreported last year. (21.02.2019)

Only about a quarter of Haitians have access to electricity. Nonprofit EarthSpark is bringing green energy to the country, and they're making it a feminist issue. (12.12.2018)

The president during the 2010 Haitian earthquake, Rene Preval, has died. Preval served two terms as leader of the country but was criticized for his handling of the crisis following the earthquake. (04.03.2017)