Dozens of protesters were killed by DR Congo security forces in 2017 in what the UN described as quashing dissent at all costs. The violence threatens peaceful and free elections. 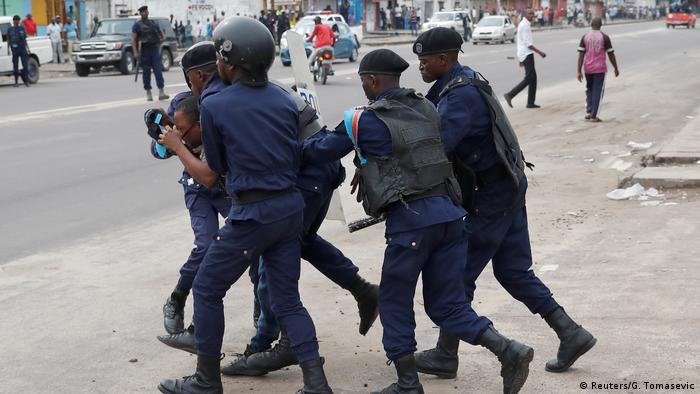 At least 47 people, including women and children, were killed last year by Congolese security forces in an "unlawful, unjustified and disproportionate" crackdown on peaceful protesters, the UN said Monday.

Democratic Republic of Congo has been hit by a wave of protests since President Joseph Kabila refused to step down at the end of his term in December 2016.

After repeated delays the election has been set for December this year, but the electoral commission has said that it may have to be held in April 2019. The opposition accuses Kabila of trying to hold onto power.

"It is particularly disturbing that security services and defense forces carry out this violence with almost full impunity which can be perceived as encouraging such repression," said UN High Commissioner for Human Rights Zeid Ra'ad Al Hussein. "We are seeing the quashing of dissent at all costs – even at the cost of human life – in the DRC by the systematic deployment of armed forces alongside the Police Nationale Congolaise to handle protests."

The UN report said Congolese security services used lethal force against protesters and attempted to cover up human rights violations, including by removing the bodies of victims and blocking national and international observers.

The report also said that restriction on fundamental rights and threats against protesters was of "deep concern" for the holding peaceful and fair elections.

Kabila has dismissed allegations his security forces have used excessive force on protesters.

The second deadly attack in a month happened where land disputes have reignited a long-dormant ethnic conflict and caused thousands to flee. The UN has warned the situation in the DRC has reached "a breaking point." (02.03.2018)