The second deadly attack in a month happened where land disputes have reignited a long-dormant ethnic conflict and caused thousands to flee. The UN has warned the situation in the DRC has reached "a breaking point." 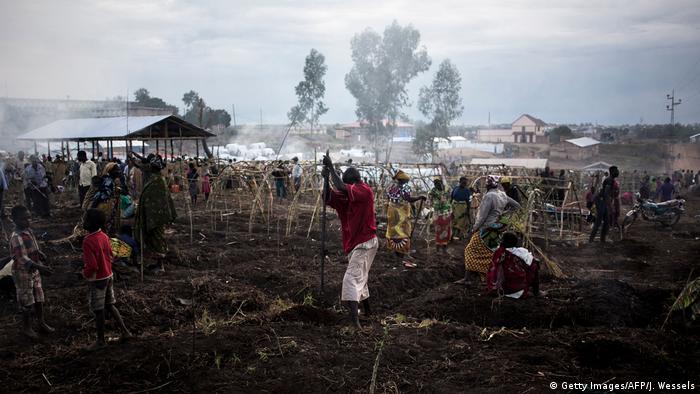 More than 40 people have been killed in ethnic clashes between Hema herders and Lendu farmers in the village of Maze, some 80 kilometres (50 miles) north of Bunia, the provincial capital of
the Democratic Republic of Congo's (DRC) northeastern Ituri province.

Land disputes have reignited a largely dormant conflict between the communities over the past two months. At least 30 people were killed during two days of clashes in February.

The two groups were involved in a bloody war that killed thousands between 1998 and 2003.

'A case of reprisals'

Commenting on this most recent incident, local army spokesman Jules Ngongo, said: "It was a case of reprisals by the two communities. According to our information, there were cases of people being decapitated." Ngongo said he could not yet provide an accurate death toll.

Others, like Alfred Ndrabu of the Catholic church's Justice and Peace commission in Ituri, cited witnesses who claimed the attack had been carried out by the Lendu and their allies. He said the Lendu had been initially repulsed by security forces but that they "returned with reinforcements, which was when they perpetrated the carnage." He claims 49 bodies have been recovered so far.

Jean-Bosco Lalo, an activist in Bunia, said 43 people had been killed. He did not say who initiated the attack, which went on through the night into Friday, but described the situation thus: "Only this morning could we start to count the dead. We saw burnt and mutilated bodies."

After years of sporadic low-level violence, the last two months have seen more than 100 people killed, hundreds of homes burnt and 200,000 people forced to flee the area.

More than 28,000 displaced Ituri residents, many of them women and children, have fled across the DRC's border into Uganda in recent weeks.

The eastern DRC has registered a sharp increase in militia activity near its borders with Uganda and Rwanda over the past year.

Also on Friday, the UN conceded that the December attack in North Kivu province that killed 15 peacekeepers and left 43 others wounded had exposed "gaps" in training. UN investigators found the mission "did not have an actionable contingency plan to reinforce and extract its peacekeepers during the attack."

"Issues of command-and-control, leadership and lack of essential enablers such as aviation, engineers and intelligence were also major obstacles and need to be addressed urgently," the UN report added.

The recent clashes in the region are part of a larger pattern of unrest in Congo which has been partially blamed on DRC President Joseph Kabila's refusal to step down after his term of office legally ended in December 2016.

The United Nations and others, such as the International Organization for Migration (IOM), have warned that the situation in the DRC has reached "a breaking point."

The UN says that some 10 million Congolese citizens are currently in need of humanitarian aid, 4.5 million of whom have been displaced by growing violence.

'The Congo Tribunal': Art taking over where justice fails

Swiss director Milo Rau's portrayal of the civil war in the Democratic Republic of Congo has been described as "the most ambitious political theater ever made." The project is now being released as a film. (14.11.2017)