Turkey has closed a key border crossing with Syria, ostensibly trapping thousands of desperate Syrians. But Turkey says they are aiding the displaced, and will open the border as it deems necessary. 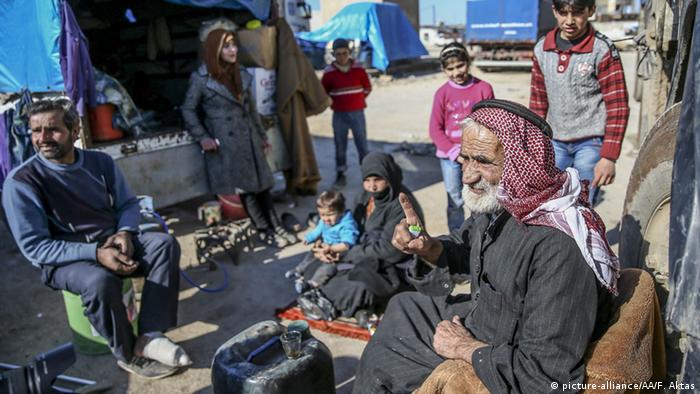 Refugees live inside a wrecked vehicle, barely covered with blankets and tarpaulins, along the Syrian-Turkish border

The UN is demanding Turkey open its border to thousands of Syrians trying to flee the war-torn country, adding that hundreds of thousands more are at risk as the regime's Russian-backed siege on Aleppo intensifies.

As many as 300,000 could be cut off from aid if government forces surround Aleppo.

Separately, UNHCR spokesman William Spindler called on Turkey to open its border to "all civilians who are fleeing danger and seeking international protection as they have done since the start of this crisis."

Turkey, which has already taken in 2.5 million refugees during the course of the five-year civil war that has killed more than 250,000, said they will allow in the refugees "when necessary," but would provide them with aid "as much as possible" within their own borders.

He warned that Russia would eventually retreat from Syria in "embarrassment" - in a similar manner to the Soviet forces who once pulled out of Afghanistan.

"Those... who turned Syria into a bloodbath will certainly pay for it one day," Davutoglu said.

Turkey's Foreign Minister Mevlut Cavusoglu warned Tuesday that up to a million more Syrians could flee Aleppo if the onslaught continues.

"The Russian planes have decimated people," he said. "The [improvised explosive devices] and mines belonging to [IS] have also slaughtered people.

"The [Syrian] regime," he concluded, "is advancing only thanks to the Russian warplanes and Shiite militias."

The UN's World Food Program is shipping lentils, pasta, beans, vegetable oil, wheat flour, sugar and other items to the town of Azaz northwest of Aleppo, near the border with Turkey. 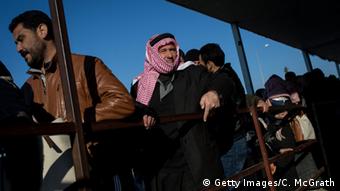 Men returning to Syria wait to pass through a border gate

"We are extremely concerned, as access and supply routes from the north to eastern Aleppo city and surrounding areas are now cut off," said Jakob Kern, the WFP country director for Syria. "But we are making every effort to get enough food in place for all those in need, bringing it in through the remaining open border crossing point from Turkey."

Meanwhile, a new NGO report says the situation in Syria is far worse than UN estimates. The new report - by the Washington-based Syria Institute and PAX, a peace organization based in the Netherlands - said 1.1 million Syrians are living under siege.