The UN refugee agency UNHCR has said close to 100,000 people, mainly foreign migrants, have fled the violence in Libya during the past week. Meanwhile, the UK has evacuated more oil workers from the troubled country. 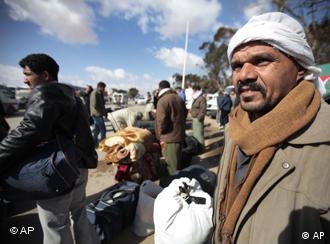 Many of the refugees are Egyptian

Nearly 100,000 people fled Libya to neighboring countries in the past week, according to the United Nations High Commission for Refugees, or UNHCR.

The UN's refugee agency said only 4,600 of those were Libyan nationals. The rest were foreign migrants, including Egyptians or Tunisians.

"We are committed to assisting Tunisia and Egypt in helping each and every person fleeing Libya," Antonio Guterres, the UN High Commissioner for refugees, said in a statement from Geneva.

"We call upon the international community to respond quickly and generously to enable these governments to cope with this humanitarian emergency." 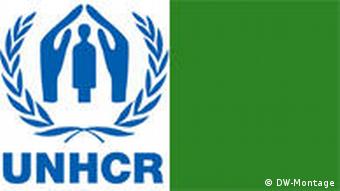 The UN urges swift action by the international community

More than 100 tons of aid supplies for 10,000 people, including tents, blankets and shelter equipment, was flown into Tunisia on Saturday for use on the Libyan border, the agency said.

Earlier on Sunday, the Red Crescent - the Arab Red Cross - said more than 10,000 people, many of whom were Egyptian migrants, crossed the border into Tunisia on Saturday alone, calling the situation a "humanitarian crisis."

Meanwhile, several countries have stepped up efforts to get their citizens out of Libya. On Sunday, Britain's Royal Air Force evacuated 150 Britons and oil workers from other nationalities from desert camps after a similar operation on Saturday.

British Prime Minister David Cameron ordered the mission despite not getting permission to fly into Libyan airspace.

The UK's Ministry of Defense said one of the transport planes was damaged in the process, apparently by gunfire, but added that there had been no injuries to passengers or crew.

On Saturday, two German Transall military transport planes evacuated 133 people, including Germans and other EU citizens, from a desert location in southern Libya.

With the violence in Libya raging for more than a week, evacuation efforts are still continuing. Tens of thousands are still waiting to leave the country. (25.02.2011)

Tens of thousands of Bangladeshis trapped in Libya

While nations around the world are trying to evacuate their citizens from Libya, thousands of Bangladeshi migrant workers are trapped in the troubled country. Several are said to have even been killed during an attack. (24.02.2011)

Asian nations have started evacuating more than 150,000 migrant workers, many of them low-paid construction laborers, trapped in Libya under the Moammar Gadhafi regime. (23.02.2011)