The head of the Labour Party was in Brussels for talks with Michel Barnier, the EU's chief Brexit negotiator. Corbyn said his party was "determined" to stop a chaotic no-deal exit. 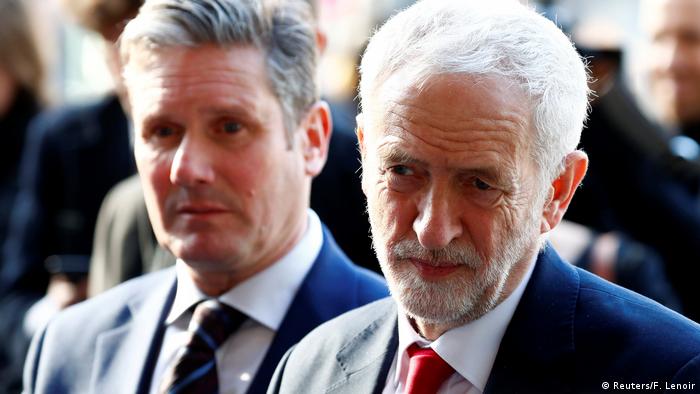 The leader of Britain's biggest opposition party warned on Thursday that there was a "very serious" risk that the country would crash out of the European Union without a deal.

Following a "useful" meeting in Brussels with Michel Barnier, the EU's chief Brexit negotatiator, Corbyn said May was "trying to keep the threat of a no deal on the table" and accused her of "running down the clock" ahead of the Brexit deadline on March 29.

The Labour Party was "determined" to remove the possibility of a no-deal exit, he said, adding that Barnier had conveyed the EU's own fears about the predicted economic damage such an outcome would entail for both sides.

The Labour leader said his party's proposal for Britain to join a new customs union with the European Union was a credible alternative to May's draft withdrawal deal. Barnier had previously described the proposal as "interesting."

Many pro-Brexit MPs have rejected the plan because it would deprive London of the right to strike independent trade deals. Corbyn contests that Britain would have a say on any new trade deals the European Union sought after his customs union came into force, despite any indication from Brussels that it would agree to such an arrangement.

Corbyn said May needed to free herself from hard-line pro-Brexit Conservative MPs who she was seeking to appease.

May has been trying to win legal concessions to the deal, which Labour and many lawmakers in her own Conservative Party voted against in a parliamentary vote in late January.

The prime minister has called on Brussels to make a provision that could force Britain to follow EU rules for years after Brexit temporary. EU leaders have refused to agree to re-open negotiations to introduce any time limit.

Britain's Brexit Ministry said on Thursday after separate talks between Barnier and Brexit Secretary Stephen Barclay that May was no longer seeking to re-open talks, even though she saw that as the best option.

Both sides were focused on agreeing to guarantees that the provision, known as the backstop, was "temporary."

'Increased' risk of no deal

Meanwhile, the European Commission's first vice president, Frans Timmermans, said Britain "might crash out even if they don't want to."

"The risk of leaving without a deal has increased," he said.