The UK prime minister and the president of the European Commission have said that talks were "constructive," yet they produced no plan to break the current impasse. Further talks are planned. 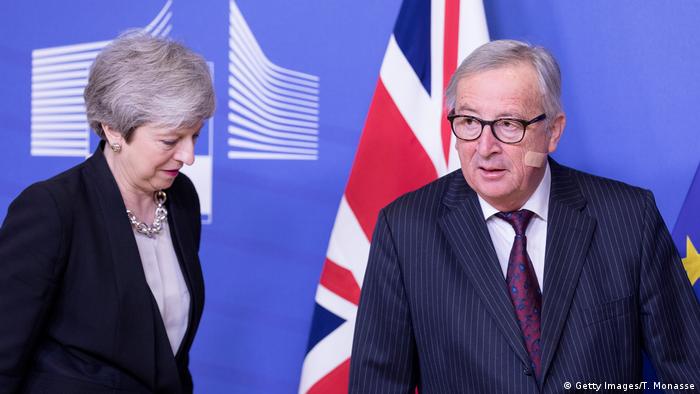 UK Prime Minister Theresa May and European Commission President Jean-Claude Juncker met once again in Brussels on Wednesday to discuss a way out of the current deadlock on Brexit. With time running out before Britain leaves the EU on March 29, the two praised the day's talks as "constructive."

Although both leaders said that talks had been conducted in a positive spirit, they did not produce any breakthroughs. Instead, a joint communique was presented outlining the topics the two had discussed.

These centered mainly on "which guarantees could be given with regard to the backstop that underlines once again its temporary nature and give the legal assurance to both sides."

The Irish backstop is a fail-safe clause, to be activated if the UK and EU fail to reach a trade agreement in later negotiations set to conclude by the end of 2020, that would avoid a hard border on the island of Ireland by temporarily keeping Britain in the EU's Customs Union. It's considered the main hurdle to May getting any deal on Brexit through Parliament, though Ireland and the EU see it as non-negotiable.

May and Juncker also talked about the role "alternative arrangements" could play in future to prevent border checkpoints at the site of a conflict that ran hot until the late 1990s.

The communique, with wording that was vague even by recent standards, spoke of the desire "to increase confidence in the focus and ambition of both sides in delivering the future partnership envisaged as soon as possible."

With five weeks left before the UK is set to leave the EU, either by design or default, May and Juncker agreed to meet again before the end of the month.

British Foreign Secretary Jeremy Hunt, who was in Berlin on Wednesday, said the only way to secure a Brexit agreement ahead of the March 29 deadline was to make changes to the Irish backstop. "This is really the only way through the current situation," said Hunt.

He added that an orderly departure was "of paramount importance," and that pushing back the deadline would leave both the UK and European Union in "paralysis."

Yet, while the prime minister was in Brussels and the foreign secretary in Berlin, May suffered yet another blow at home. Amid her efforts to unite her party around a divorce deal, three pro-EU lawmakers in her own Conservative party announced plans to quit on Wednesday over what they called the government's "disastrous handling of Brexit."

No matter the venue, the main obstacle in reaching a Brexit agreement that EU officials and UK parliamentarians can get behind is the so-called Irish backstop. The clause is a safeguard that would keep Britain in the EU customs union until an alternative trading plan is found to ensure EU member Ireland's border with the British province of Northern Ireland remains open.

Brexiters in May's Conservative party have demanded the measure be made temporary to prevent Britain from being locked in a form of union indefinitely. But the EU has refused changes to the provision.

Hunt told the audience at Berlin's Konrad Adenauer Foundation that there needed to be "a simple and important change" to the backstop to make sure Britain is not "trapped in the customs union forever."

The foreign secretary spoke about Germany's close post-war ties with Britain, and said that "if these negotiations go wrong, then there is a risk that we poison relations between both sides in a way that would be profoundly damaging."

"We must all do all that we can to ensure that a deal is reached," he added. "I think people want to move on and they want to demonstrate that we can have a Brexit that respects the referendum result but also that we remain best of friends with our neighbors in Europe."

At talks in Brussels, British premier Theresa May has raised 'various options' for getting around the UK's difficulties with the Withdrawal Agreement. More meetings are planned. (07.02.2019)

UK: How does the Conservative Party leadership process work? 08.07.2022

The race for a new leader of the Conservative Party is already underway after Boris Johnson fired the starting gun by announcing his resignation. But how does the somewhat secretive process work?