About 30 people have been killed in the eastern Ukrainian city of Mariupol as fighting escalated to the worst level in months. Pro-Russia separatists had announced they were launching an offensive on the strategic city. 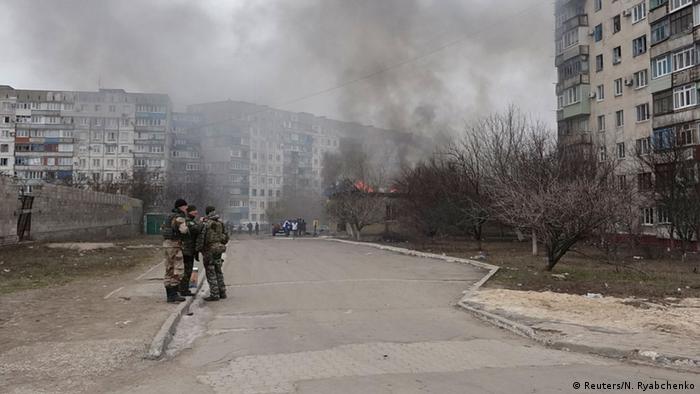 The death toll from rocket fire attacks in eastern Ukraine climbed on Saturday, with an estimated 30 people killed and dozens more wounded in a residential area of the city of Mariupol.

"The walls were shaking, the window frames were shaking, paint started to crumble off the house. I hid in the basement. What can you do? I took the dog and the cat. In the basement you can hear the earth tremble," 76-year-old pensioner Leonid Vasilenko told Reuters news agency by telephone from the eastern suburbs of Mariupol.

While authorities in Mariupol have blamed the separatists for the attack, the separatist leaders denied responsibility. They had, however, announced they would move towards taking over the strategically important city, which is controlled by the Kyiv-based Ukrainian government.

"Today an offensive was launched on Mariupol. This will be the best possible monument to all our dead," separatist leader Alexander Zakharchenko was quoted as saying by the RIA Novosti news agency at a memorial ceremony being held in the separatist stronghold of Donetsk.

Zakharchenko had earlier rejected continued talks on a ceasefire agreement which had been signed in Minsk last September and repeatedly violated. That rejection came despite foreign ministers of Germany, France, Russia and Ukraine agreeing earlier in the week to measures aimed at easing the fighting.

Ukraine's President Petro Poroshenko issued a statement in response to the latest assault.

"We are for peace, but we accept the challenge of the enemy. We will protect our motherland," Poroshenko said.

The European Union on Saturday denounced the attacks, saying the escalation in fighting would harm the relationship between the EU and Russia.

"I call ... openly upon Russia to use its considerable influence over separatist leaders and to stop any form of military, political or financial support," EU foreign affairs chief Federica Mogherini said in a statement on Saturday, adding "this would prevent disastrous consequences for all."

Kyiv and Western leaders have repeatedly accused Russia of supporting the separatists with weapons and fighters, something Moscow denies. The EU has targeted Russia with sanctions.

The Organization for Security and Cooperation in Europe (OSCE) watchdog group's special monitoring mission (SMM) for Ukraine also expressed concern on Saturday about the growing number of casualties among civilians.

"The SMM strongly condemns the continuation of the fighting in residential areas. Using residential areas as firing positions attracts counter-firing to these areas, further endangering the lives of civilians," they said in a statement, calling for restraint from all sides.

Mariupol lies on the Azov Sea and is the major city between mainland Russia and the Russia-annexed Black Sea peninsula of Crimea. It is an important port city and among its key exports are coal and steel from the Donetsk region, much of which is held by pro-Moscow separatists.

A separatist assault in the region in August raised fears they were attempting to create a land link between Crimea and Russia. The violence which ensued was one of the factors which led to the September 5 truce being agreed in Minsk.

The United Nations on Friday raised its estimate of the conflict's death toll to 5,100 since April, 2014.