An explosion at a trolleybus stop in war-torn eastern Ukraine's Donetsk has killed several people, an official has said. Government forces have also reportedly withdrawn from the city's long-contested airport. 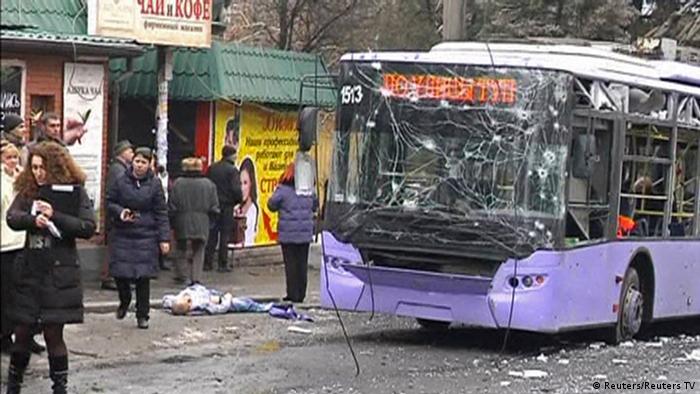 A Reuters cameraman said he saw six bodies on the ground near, and inside, a trolleybus in the southern part of Donetsk city, a stronghold for pro-Russian fighters in Ukraine. Windows of shops nearby had been blown out by the blast. 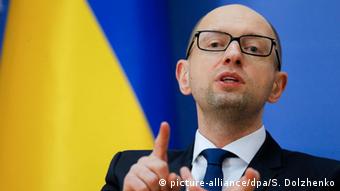 Prime Minister Arseniy Yatsenyuk blamed the attack on separatists, who Ukrainian officials and their allies in the United States and EU say are backed by Russia.

The Russian Foreign Ministry denounced the civilians' deaths in rebel-held Donetsk as a "grave provocation" and placed the blame for the attack on Ukrainian troops.

"We regard this incident as a crime against humanity, a blunt provocation aimed at undermining efforts to seek a peaceful solution of the crisis," the ministry said in a statement.

On Wednesday night, shelling in a neighborhood near Donetsk airport, the epicenter of clashes in recent days, hit another bus and killed one person, city official Ivan Prikhodko told the AFP news agency.

Thursday's violence came hours after the foreign ministers of Russia, Ukraine, Germany and France ended a crisis meeting in Berlin with a joint call to cease hostilities, but no breakthrough agreement to stop the bloodshed. 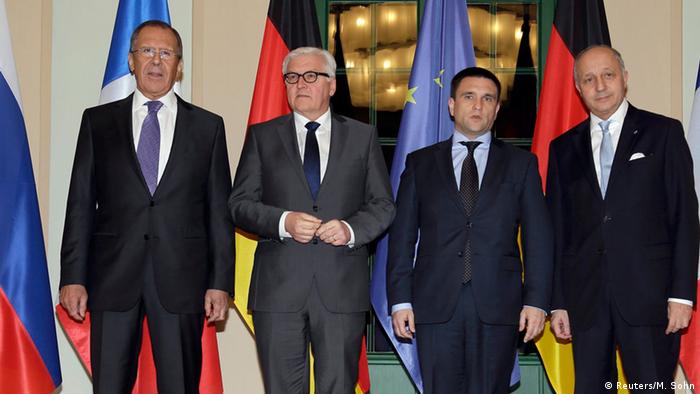 German Foreign Minister Steinmeier with his counterparts from France, Russia and Ukraine

"Today we have finally agreed that the demarcation line mentioned in the Minsk agreement is the line from where the withdrawal of heavy weapons needs to take place now," German Foreign Minister Frank-Walter Steinmeier told reporters late on Wednesday.

Ukrainian forces have all but withdrawn from Donetsk airport after months of fighting. Military officials, however, have continued to insist they hold part of the terminal.

The Ukrainian Defense Ministry said Thursday that six soldiers had died over the previous day of fighting for the airport, which lies on the northern edge of the Russian-backed separatists' stronghold. 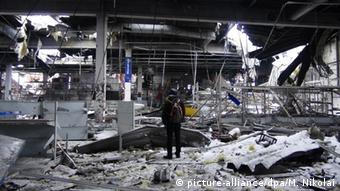 Damage inside of buildings in Donetsk area

Fighting for the airport peaked over the weekend, shattering the relative tranquility in place since a new truce was reached in early December.

More than 5,000 have been killed and a million forced out of their homes by the nine-month conflict raging over the Russian-speaking separatist east of Ukraine, an international monitoring group (OSCE) said on Thursday. 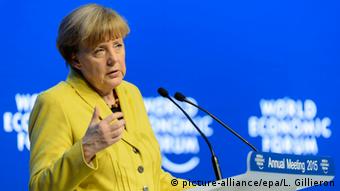 "The fighting has intensified to pre-agreement, pre-stand down levels and in some cases beyond," Breedlove told reporters in Brussels, referring to the largely ineffective ceasefire agreed in Minsk.

German Chancellor Angela Merkel accused Russia of violating Europe's peaceful post-war order with its interventions in Ukraine and said Europe could not consider lifting economic sanctions against Moscow until it changed course.

"The annexation of Crimea is not just any annexation. It is a violation of the values that created a peaceful order in Europe after World War Two, namely the acceptance of borders and respect of territorial integrity," Merkel said at the World Economic Forum in Davos, Switzerland.

Opinion: At least they're still talking

Steps toward de-escalation should be taken in eastern Ukraine - that is all that four-way talks in Berlin came up with. An urgently needed move, says DW's Bernd Johann and points to fresh tensions in Donetsk. (22.01.2015)

Foreign ministers have held talks in Berlin, apparently yielding "progress" in resolving the ongoing Ukraine conflict. Meanwhile, the US described Russia's current proposal as nothing more than an "occupation plan." (21.01.2015)

US wants to dominate the world, says Russia's Lavrov

Russia's top diplomat has responded to President Obama's yearly address with accusations that the US will settle for nothing less than number one. A Kremlin spokesman has also accused the West of trying to unseat Putin. (21.01.2015)