High-level talks in Berlin have yielded progress toward a new ceasefire in Ukraine. Representatives from Kyiv and Moscow have agreed that both sides would pull back heavy arms from the front lines in eastern Ukraine. 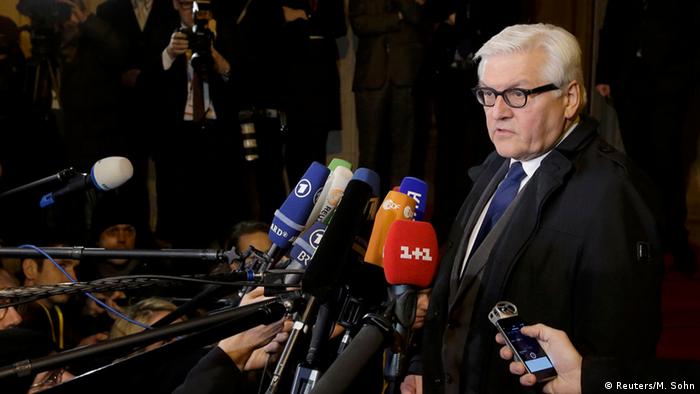 Amid fresh clashes in eastern Ukraine on Wednesday, the foreign ministers of Ukraine and Russia made progress in negotiations toward a ceasefire. The high-level meetings held in Berlin were mediated by their German and French counterparts.

While a truce remained beyond their reach, the opposing sides - with Russia widely believed to be providing financial and militaristic support to separatist rebels in eastern Ukraine - said they would ensure that heavy arms were pulled back from the front lines.

"Today we have finally agreed that the demarcation line mentioned in the Minsk agreement is the line from where the withdrawal of heavy weapons needs to take place now," German Foreign Minister Frank-Walter Steinmeier (pictured) told reporters late on Wednesday.

Steinmeier said they had made "noticeable progress," but cautioned that Kyiv and the eastern Ukraine separatists must now act.

"A lot depends on the question if that what we have agreed on will not only remain printed paper, but will also change the situation on the ground."

In September, the governments of Ukraine and Russia, as well as the pro-Russian separatists signed a ceasefire in Minsk, which foresaw the creation of an artillery buffer zone. Under the agreement, heavy weapons would be moved 15 kilometers (9 miles) away from the front line on each side, effectively creating a 30-kilometer buffer area.

Following repeated failures by both sides to uphold the truce, mediators are now seeking to ensure the implementation of more provisions in the Minsk agreement before holding final peace talks in Kazakhstan's capital Astana.

"The plan would seek to legitimize territorial gains made by separatists in September as well as Russian personnel and equipment on the territory of Ukraine," US Ambassador Samantha Power told the UN Security Council on Wednesday.

Ukraine says that rebels have grabbed 500 square kilometers (190 square miles) in violation of the truce deal.

"Let us pull the veil away from Putin's peace plan and call it for what it is - a Russian occupation plan," she said.

According to Ukrainian President Petro Poroshenko, there are currently 9,000 Russian troops on Ukrainian soil.

Ukrainian President Petro Poroshenko has condemned 'Russian terror' in a speech at the Davos World Economic Forum. He claimed that Russian military forces were in eastern Ukraine. (21.01.2015)