Ukrainian President Petro Poroshenko has condemned 'Russian terror' in a speech at the Davos World Economic Forum. He claimed that Russian military forces were in eastern Ukraine. 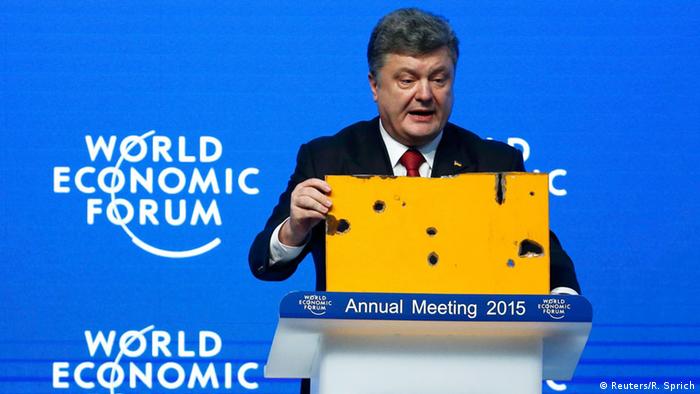 At the Davos World Economic Forum in Switzerland, Ukrainian President Petro Poroshenko painted a picture of his nation being "more united than ever before," but facing terrorist threats just like the rest of the world.

Poroshenko drew a connection between a recent attack on a bus in Ukraine near Volnovakha that killed 12 people, the downing of Malaysia Airlines Flight 17 (crashed, likely shot down, in Ukraine last summer), and the attacks in Paris against the offices of satire magazine Charlie Hebdo, saying they were all acts of terror that required global solidarity to fight. 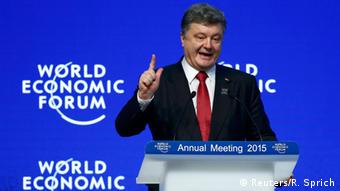 Poroshenko was due to head from Davos to Berlin for four-way talks with Russia, France and Germany

In front of his audience in Davos, Poroshenko held up piece of charred metal that he said was a piece of the bus fired upon in Volnovakha. He placed the blame for that attack on Russia.

Furthermore, Poroshenko said there were over 9,000 Russian troops currently in Ukraine along with 500 armed vehicles and tanks.

"If this is not aggression, what is?" Poroshenko asked the crowd assembled in Davos.

Responding to similar allegations of Russian troops in Ukraine from earlier in the day, Russian Foreign Minister Sergei Lavrov denied the claims.

"I say every time: if you allege this so confidently, present the facts," Lavrov said before departing for Berlin for talks with his Ukrainian, French, and German counterparts. "Before demanding from us that we stop doing something, please present proof that we have done it."

Lavrov did say that pro-Russian separatists in Ukraine were occupying more territory than had been agreed to in a September ceasefire agreement, but had received assurances that they would retreat to the zones agreed upon last September in Minsk. 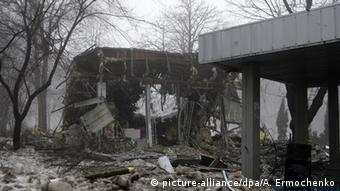 The fighting remains most fierce around Donetsk's airport, these houses nearby were damaged on Tuesday

Shelling in Donetsk and Luhansk, which began Tuesday, has continued into Wednesday and caused at least five civilian deaths. Dozens more have been injured.

The talks later on Wednesday will seek to put a lid on the latest tensions that have rocked eastern Ukraine. A ceasefire in place between Ukrainian forces and the pro-Russian rebels since September is shakier than ever, and Lavrov stated on Wednesday he wanted to avoid another Cold War.

One of the main goals of the meeting in Berlin will be to reach an agreement that will see heavy weaponry pulled back from the disputed regions.

No matter what the outcome, eastern Ukraine will likely remain tense for some time to come.