Ukraine has signed a new agreement to buy Russian gas deliveries at a discounted price until the end of June. It's hoped both sides will be able to find a long-term solution in the next three months. 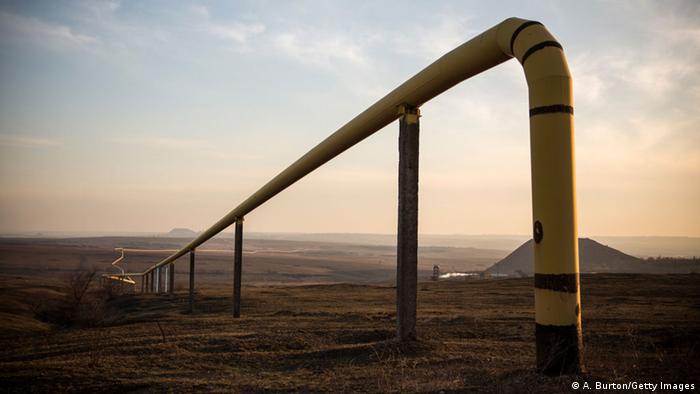 Under the interim deal, Kyiv will pay the lower price of $248 (229 euros) per thousand cubic meters of gas, after paying $329 in the first quarter of this year, Ukraine's energy ministry said Thursday.

Ukraine had been receiving gas from Russia as part of a "winter package," which formally expired on March 31 and needed to be replaced.

The two countries are bound by a 10-year gas agreement signed in 2009, but disputes over gas pricing in recent years have resulted in periodic disruptions to energy deliveries. The pro-Russian separatist insurgency that erupted in eastern Ukraine one year ago has also added to tensions between Moscow and Kyiv.

The latest gas agreement extends the terms of the winter deal between the Ukrainian gas company Naftogaz and Russian gas giant Gazprom. That means cash-strapped Kyiv will have to continue providing advance payments in return for gas deliveries, as it did under the previous plan.

"This short-term extension of the winter package gives both sides time to develop a longer-term solution," said Andriy Kobolev of Naftogaz.

Ukrainian Energy Minister Volodymyr Demchyshyn said in a statement the agreement represented a "victory" for an economic, rather than a political, approach to relations between the two nations' gas firms. Demchyshyn also said Ukraine hoped to sign a memorandum with Moscow over the next month to secure supplies until the end of March 2016.

Ukraine is the most important transit country for the distribution of Russian gas to the European Union. Around one third of the EU's gas comes from Russia, with half that amount traveling via Ukraine's pipelines.

Talks between Russia, Ukraine and the European Union to find a long-term solution to the row over gas pricing are expected to resume in Berlin in mid-April.

Meanwhile Kyiv, whose economy is approaching bankruptcy, is expected to hold talks with its creditors on restructuring its debt. Finance Minister Natalia Yaresko said Thursday in an interview with newspaper Ukrainska Pravda that a $15.3 billion funding gap needed to be filled.

"We're waiting for an answer from them this week that they are ready and have created a committee ... so that we can hold concrete talks with them," Yaresko said.