Volodymyr Zelenskiy has moved to disband parliament after being sworn in as the new president of Ukraine. The political novice is under pressure to deliver much-needed reforms after unseating incumbent Petro Poroshenko.

Volodymyr Zelenskiy, a 41-year-old comic with no political experience, announced the dissolution of parliament in his inaugural speech as the president of Ukraine on Monday.

By disbanding the chamber and calling early elections, the new head of state is hoping to win the support he needs to tackle a raft of challenges, including a struggling economy and the conflict with Russia-backed separatists in eastern Ukraine.

What happened during the ceremony: 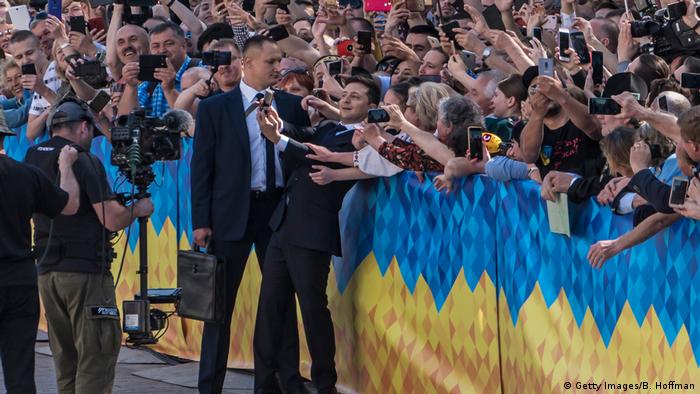 Who is Zelenskiy? Zelenskiy is best known for playing a fictional president on the popular television show "Servant of the People." Now he's also playing that role in real life, after a landslide victory against incumbent Petro Poroshenko in last month's runoff election. Some critics claimed his run was backed by controversial Ukrainian oligarch Igor Kolomoysky, whose channel broadcasts his shows. But Zelenskiy has denied having any political connection to the businessman.

What are his policies? During the campaign, Zelenskiy broadly sought to capitalize on voter disillusionment by framing himself as an alternative to the political establishment. He has so far provided few details about his policies, what he plans to do in office, or who he will appoint to key posts. However, he has said he wants to tackle corruption and keep Kyiv on the pro-Western course it has chartered under Poroshenko. He has also pledged to push Russian President Vladimir Putin to end Moscow's occupation of Ukrainian territory.

Challenges ahead: The young president is under pressure to rein in the wealthy oligarchs who wield significant influence in Ukraine, tackle widespread corruption and a stagnant economy. Many voters also expect him to stand up to Putin and end a draining five-year conflict against Moscow-backed separatists in Ukraine's east.  DW's correspondent in Kyiv, Nick Connolly, said there were "colossal expectations from ordinary Ukrainians" that Zelenskiy would be able to "change Ukraine and allow it, after 20-30 years of independence, to really make good on its potential."

Problems in parliament: Zelenskiy begins his term in office without a parliamentary majority, a fact that will make it difficult for him to pass reforms. His party currently has no seats. Dissolving parliament and calling snap elections ahead of the scheduled date in October could boost support in a chamber currently dominated by Poroshenko allies. Lawmakers have attempted to block these plans — last week, the governing coalition collapsed after a group of MPs from the People's Front pulled out.

Volodymyr Zeleniskiy gave incumbent Petro Poroshenko a record smackdown in Ukraine's presidential election. How did a 41-year-old comedian with no clear manifesto win the trust of voters — almost without campaigning? (22.04.2019)

Volodymyr Zelenskiy has offered to grant Ukrainian citizenship to Russians, responding to a similar move by Russia. However, he coupled the offer with a dig at the situation in the neighboring country. (28.04.2019)

Investigative journalism is a dangerous job in Ukraine

Another journalist is fighting for his life in Ukraine after a brutal attack; Vadym Komarov had just promised incendiary new findings. Ukraine's reporters lament the lack of protection and the legal system's failings. (09.05.2019)