Ukraine launches missile drill near Crimea, prompting anger in Moscow | Europe | News and current affairs from around the continent | DW | 01.12.2016

The Kremlin has voiced concerns over the defense maneuvers, saying it sets a "dangerous" precedent. But Ukraine's military officials dismissed Moscow's concerns, noting that the drill is in line with international law. 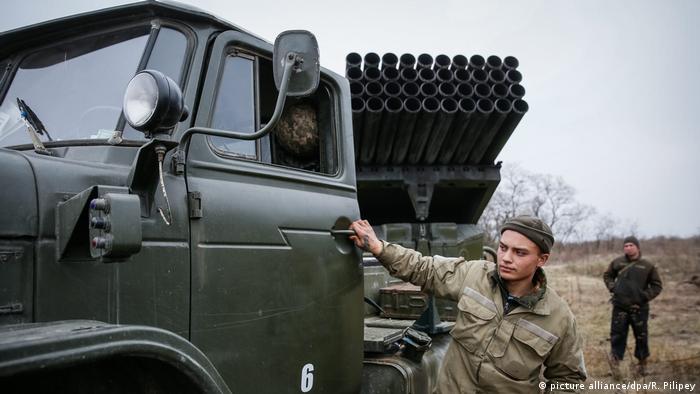 More people are being arrested by both Russia and Ukraine on charges of espionage. The arrests will likely make negotiations for a peaceful settlement of the Ukraine conflict even more difficult.

Ukraine's military on Thursday started a two-day missile drill in the southern Kherson region bordering Crimea, prompting Moscow to criticize the move as a "dangerous precedent."

Kremlin spokesman Dmitry Peskov told the Russian daily "Vedomosti" that Russian forces would shoot down missiles if it threatened the country's territory.

"In the Kremlin, we wouldn't want to see any actions by the Ukrainian side that breached international law and that might create dangerous conditions for international flights over the territory or Russia and adjacent regions," said Peskov.

His remarks come amid Ukrainian media reports that Russia's defense ministry said it would destroy Kyiv's missiles and launchers if it violated Russian airspace.

'No response from Russia'

However, Ukrainian military spokesman Volodymyr Kryzhanovskiy told local news site that 112.ua missiles would not land closer than 19 miles (30 kilometers) from the Crimean border, adding that the drill does not violate international law.

"The launches have started. Everything is going according to plan. There has been no response from Russia, but the Ukrainian military is ready for anything," Kryzhanovskiy said.

"Threats to use weapons against Ukraine are an effort to turn the hybrid war that Russia has been waging against us for the past three years into an active war," he said.

Relations between Moscow and Kyiv have soured since Russia illegally annexed the Crimean Peninsula in an internationally-condemned referendum.

In eastern Ukraine, a pro-Russia insurgency backed by Moscow erupted in the wake of European-leaning revolt in Kyiv that forced out Kremlin ally former President Viktor Yanukovych.