Ukraine Holocaust memorial desecration ′not an isolated case′ | Europe| News and current affairs from around the continent | DW | 24.09.2019

A Holocaust memorial in southern Ukraine has been defiled with Nazi symbolism. It's the third such incident in a matter of weeks. This time, the anti-Semitic vitriol was directed at President Volodymyr Zelenskiy himself. 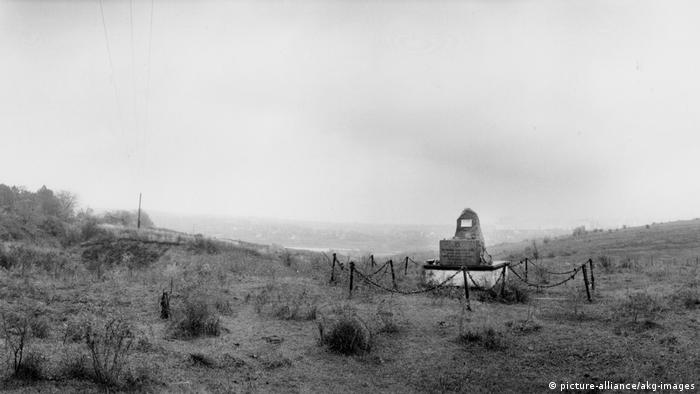 The Bogdanovka Holocaust memorial was erected in 1991

Shock and embarrassment — the people of Bogdanovka, a village in southern Ukraine, are still coming to grips with the fact that someone defiled their Holocaust memorial with swastikas a week ago. The villagers condemned the defacement on Sunday at a ceremony commemorating Holocaust victims and those who saved Jews from death, one participant wrote on Facebook.

"The villagers are shocked and say that none of them could have done this because they have great respect for this place," Anatoly Podolsky, head of the Ukrainian Center for Holocaust Studies in Kyiv, told DW.

Wonderful people live in Bogdanovka, agrees Boris Zabarko, a Ukrainian historian, publicist and chairman of the Association of Ghetto Survivors. Locals there "always take care of the memorial, it must have been someone from outside of town," he added.

Swastikas and a threat

Bogdanovka is around 230 kilometers (140 miles) north of the Black Sea city of Odessa. After Nazi Germany invaded the Soviet Union, the area became part of the territory under Romanian occupation. In the fall of 1941, more than 54,000 Jews from Bessarabia and Odessa were interned in a camp at the village. Most of them were executed in December of the same year on the side of an embankment. Some people have compared the killings with the massacre of Babyn Yar in Kyiv, though the Bogdanovka murders are not as well known. A memorial to commemorate the victims was erected in 1991.

Then last week, swastikas were sprayed on the monument and a note was left that contained threats to prominent Ukrainian Jews, including President Volodymyr Zelenskiy. Should he implement his land reform, there would be "a second Holocaust," warns the message printed on a sheet of paper and taped to the memorial, referring to the new president's plans to lift the previous moratorium on the purchase and sale of agricultural land. Zelenskiy is regarded as an advocate of land privatization, currently halted by a moratorium that might fall by the end of the year. Many Ukrainians fear the privatization of land could spell the next stage of a sellout.

It was the third desecration of a Holocaust memorial in Ukraine within just a few weeks. The deputy foreign minister and the Israeli ambassador have condemned the act and called for clarification. Michael Tkach, chairman of the United Jewish Community of Ukraine, also condemned the crime but was critical of the fact that a previous incident in the same area received little attention. "The fight against anti-Semitism must be conducted systematically," he told DW. In general, according to his organization, "the level of anti-Semitism" in Ukraine is down this year. 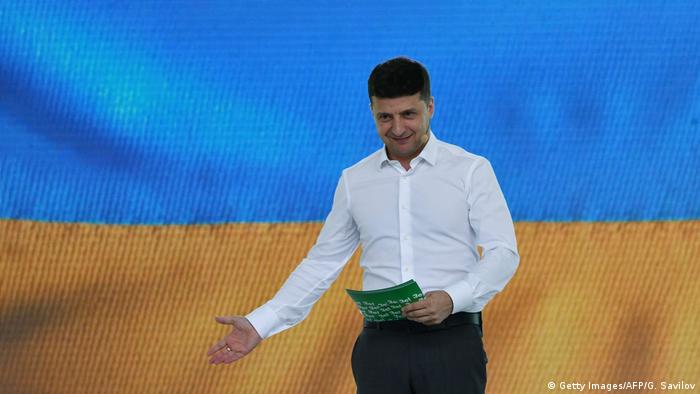 It is not clear whether the Nazi symbol sprayed on the memorial in Bogdanovka was meant to spread anti-Semitic sentiment against the still very popular new president. "It could be anything, even a provocation, but it's not an isolated case," said the historian Zabarko, adding that Holocaust memorials around the country have been repeatedly desecrated over the past five to seven years.

"This can be both a genuine expression of a marginal Ukrainian radical anti-Semitic trend and a deliberate provocation," said Kyiv-based political scientist Andreas Umland, an expert on right-wing extremism in Ukraine. "It's possible it was just hooligans. The penalties for these types of crimes in Ukraine are relatively high and entail up to five years imprisonment. It cannot therefore be ruled out that this is a targeted action by a major political actor."

Anatoly Podolsky believes neither in a trend nor in a danger for the Jewish community in Ukraine. In fact, he sees "a positive trend" in the opposite direction. While multiple sites have been desecrated in September, a total of nine new Holocaust memorials were also inaugurated in Ukraine this month as part of the international "Preserving Memory" project, which is supported by the Ukrainian Center for Holocaust Studies and the government. The "modern and touching memorials" are "a good answer to all looters" who want to damage the image of Ukraine, Podolsky said.