Germany remembers ′Holocaust by bullets′ in Ukraine | Europe | News and current affairs from around the continent | DW | 29.08.2019

Between 1941 and 1944, German soldiers and police shot and killed more than 1 million Jews in Ukraine. The German government now wants to raise awareness of this chapter in history. 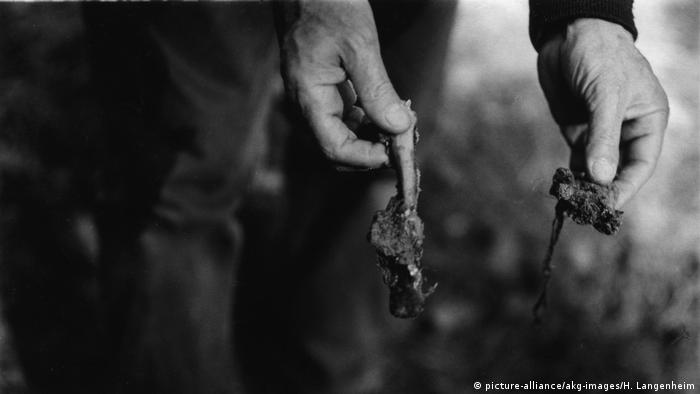 They are sites of horror that many in Germany have even never heard of: Samhorodok, Ljubar, Plyskiv.

In each of these places, more than 500 Jews were executed by the Wehrmacht, SS soldiers and the German police. Hundreds of mass executions were carried out by Nazi death squads in Ukraine.

"The Holocaust by bullets deserves a place in our memory. However, that it is yet to happen," said Uwe Neumärker, director of the Foundation Memorial to the Murdered Jews of Europe.

The German government now wants to raise awareness of the so-called Holocaust by bullets. This week, Foreign Minister Heiko Maas opened an exhibition in Berlin called "Protecting Memory" to commemorate the murdered Jews, Romas, prisoners of war and the mentally ill in what is nowadays Ukraine.

"Until this day, despite the incomprehensible dimensions of these crimes, we see that this chapter of the Holocaust has received too little attention," said Maas.

The exhibition features places in Ukraine where for decades there has been nothing demarcating sites where mass executions took place. Memorials are now gradually being set up: This can be a stone plaques bearing an inscription or just a group of benches, where people can meet to sit and remember the past.

These are places of remembrance and "symbols of our responsibility, our crimes," as Uwe Neumärker puts it. His foundation has been working with Ukrainian organizations to design the monuments collaboratively.

Ukrainian photographer Anna Voitenko has been documenting progress at the new memorials with her camera. She has experienced the transformation of bucolic landscapes into monuments first hand: "Sometimes, the places were so beautiful with blooming meadows and fields, and then you remember what happened there."

She said that conversations with victims' relatives were often traumatic: "Sometimes by the end, everyone would be crying," Voitenko told DW. She recalled a time where she stood alongside a Ukrainian Jew on a wildly overgrown picturesque hilltop. Then she realized they were standing on a mound of bones and skulls . And her companion said to her, "I could have ended up here."

It is important that these monuments are set up, says Voitenko.

"Otherwise people might end up living on gravesites unaware of what happened there."

The Ukrainian ambassador to Germany, Andriy Melnyk, sees the exhibition and the new monuments as part of a project "explicitly supporting the Ukrainian people."

Melnyk is well aware of the fact that almost every Ukrainian family was affected by the Holocaust: "Every third Jewish citizen who was exterminated by the Nazis lived on the territory of today's Ukraine." As few people in Germany seem to know that, Melnyk sees an "urgent need for action."

Students must learn of the Holocaust in Ukraine

The Ukrainian ambassador also spoke of his son, who went to a German highschool where he learned nothing about the Ukrainian victims of the Nazi regime — something that left him "perplexed and disappointed." Melnyk asked the German foreign minister that appropriate changes be made to German schools' curricula.

He is also calling for a monument to be set up in Berlin to commemorate the Ukranian victims of the Nazi regime.

As a first step, the German Foreign Ministry has pledged close to €2 million ($2.2 million) to support the "Protecting Memory" project and its plans for new monuments, educational programs, and further historical research.

In times of increasing anti-Semitism and the rise of right-wing populists, Maas believes remembering German history is more important than ever.

The exhibition, which will initially be on show at the Foreign Ministry, will then go on tour to educate as many people as possible about the Holocaust in Ukraine.