World War II ended 74 years ago. But volunteers are still searching parts of Germany for the remains of the war dead. Nina Werkhäuser reports from the village of Klessin, near Berlin.

Jutta Höhn's son only wanted to build a driveway for their house in the German village of Klessin, near the Polish border. But, as he removed one layer of soil after the next, he made an unexpected find: WWII-era ammunition, and human remains.

Now, Höhn is peering down into a large pit on her property, with the skulls, bones and fragments of helmets and boots of eight soldiers clearly visible. Neither she nor her son was expecting such a find.

"So many," she says, with a surprised look. "Who would have thought?" she adds.

Inside the pit, dressed in orange overalls, Werner Schulz of the Association for the Recovery of the Fallen in Eastern Europe (VBGO) is leaning over the remains, carefully brushing soil from bones. He's one of the group's excavation experts and tasked with documenting the find. Schulz says "these are German soldiers, I can tell by their helmets and insignia." 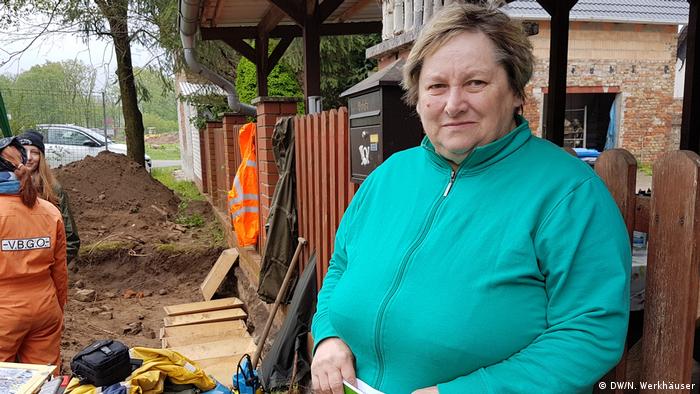 Above the pit, a drone hovers in the air, photographing the site. Not long after, the excavation team discovers the remains of four further soldiers nearby. The volunteers recover not only the insignia of the deceased, but also their wedding bands and signet rings, which can help identify them later on.

Nobody knows how many fallen soldiers still lie buried in the soil in and around the village of Klessin. It was here, in the winter of 1945, that the Red Army crossed river Oder to begin its advance on the German capital, Berlin. The Wehrmacht, Nazi Germany's armed forces, put up fierce resistance and fighting raged for weeks.

Read more: The German military and its troubled tradition

The village of Klessin saw the heaviest clashes. To keep up the pressure, the Wehrmacht's high command insisted that "if Klessin is lost, Berlin is lost." Increasingly desperate German soldiers holed up in the local castle, but, eventually, surrendered to the Red Army.

Klessin Castle was reduced to rubble, and the village was flattened. In these tumultuous times, dead soldiers of both were left lying in trenches and ditches, on the freezing ground, some were haphazardly buried. Today, the site where the castle once stood is covered in grass and trees. Locals are planning a memorial site to commemorate the dead. 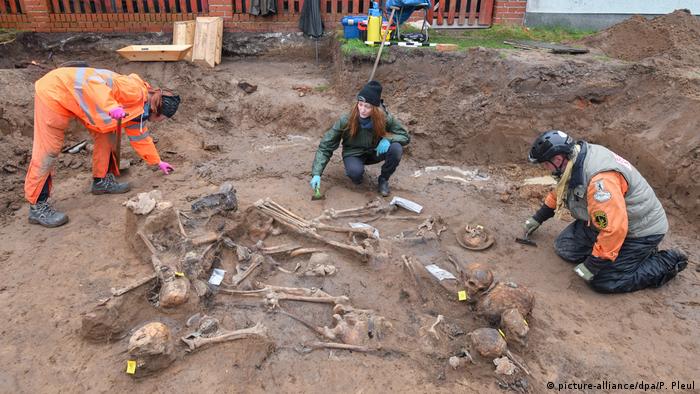 Both professionals and amateurs have helped excavate the remains in Klessin

After the war, many never heard again from their sons, fathers or brothers, who had been sent to the Oderbruch region to stop the Red Army advance. But thanks to the volunteers of the VBGO, today some of these relatives know where their loved ones perished during the final weeks of the war.

In 2009, the volunteers began systemically searching the Oderbruch region for human remains with the help of diggers, shovels and a sensor. Twice a year they spend a week digging up former trenches.

Albrecht Laue, who coordinates the excavation work says "we have dug up endless kilometers of earth and trenches." Adding that "so far, we have found the remains of 120 German and 100 Soviet soldiers."

'A service to those alive'

Reports by witnesses and historians as well as aerial photographs can help identify locations where soldiers may lay buried  — as was the case with the Höhn family's property. Indeed, roughly one year after the guns fell silent in WWII, a local pastor visited Klessin and discovered graves of unknown soldiers. He penned a letter about it, also noting that the village had been reduced to rubble and that there could be many unexploded mines in the area.

Albrecht Laue has a copy of the pastor's letter. It could prove essential. He says finding fallen soldiers is "a service to those alive," so they can finally learn about the fate of their relatives in the final stages of WWII.

Laue initially joined the group to find out about his own great grandfather, who had died fighting for the Wehrmacht in Russia. Meanwhile, the 45-year-old has become the director of the group, which has links to like-minded organizations abroad. 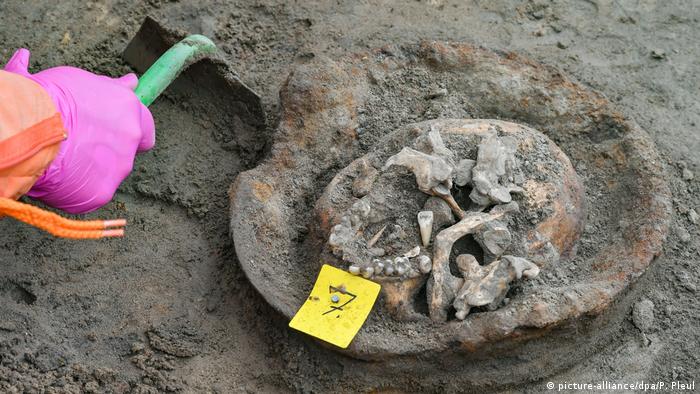 Volunteers from Russia, Poland and other countries regularly help the group during their excavations. Anton Togashow, who lives in Moscow, drove all the way by car to the village of Klessin to assist the search. "If we don't do it, who will?" he says, adding that these excavations mean a lot to him.

Laue says that over the years he and his organization have realized that "there is a great need for our work and that there is probably nobody in this region who would be able to carry out such extensive searches." Without their dedication, and that of countless other volunteers, many more war dead would probably still be lying in the ground in Oderbruch.

Near the Klessin excavation site, a tent has been set up where Lara Indra is sorting though soldiers' bones. The 23-year-old anthropologist from Switzerland has sacrificed her holiday to help piece together skeletons and determine the sex, approximate age and injuries of the dead.

All this can help identify the deceased. Indra says that "many descendants of the fallen want to know what happened to their relatives; that makes sense to me and I enjoy helping." VBGO documents all its findings and sends a report to the Federal Archives in Berlin, which has lists of all those who went missing in WWII. It informs relatives if remains of their loved ones are found.

On their latest excavation mission in Klessin, VBGO volunteers found the remains of 15 German and one Russian soldier. Unfortunately, it is not always possible to identify them. Even so, all the remains are buried in nearby war cemeteries to give the soldiers a final, dignified resting place.

Holocaust survivors and thousands of young Jews from 40 nations have made the annual remembrance march from Auschwitz to Birkenau. Nazi Germany built the death camp in 1940 in then-occupied Poland. (05.05.2016)