Ukraine heads for close presidential run-off | Europe | News and current affairs from around the continent | DW | 18.01.2010

Pro-Russian opposition leader Viktor Yanukovich and populist Prime Minister Yulia Tymoshenko will face off in a second round of presidential elections after Sunday's poll failed to produce a clear winner. 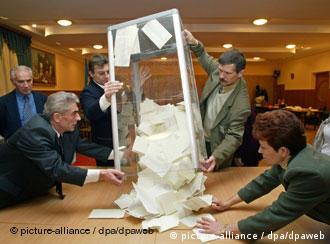 Nobody won an absolute majority on Sunday

The Central Election Commission's figures put former central bank chairman Sergey Tigipko in third place with 12 percent. The Ukrainian businessman will be key in deciding the February 7 run-off vote. Tigipko refused to endorse either candidate, saying it was up to his supporters to decide.

"I'll give no support for any one of them. I'll tell my voters to decide by themselves," he said. "The people who supported me were voting for changes in Ukraine, for modernization. I hear about this modernization neither from Yanukovich, nor from Tymoshenko." 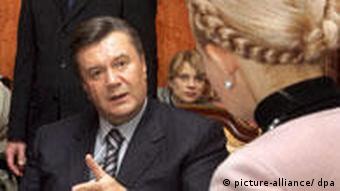 Tymoshenko and Yanukovich will face off in February

Opposition leader Yanukovich has called for greater independence and neutrality by not joining NATO or any other bloc. His Party of the Regions is allied to the Kremlin's United Russia party, but Yanukovich has worked with Western public relations teams in order not to appear as a puppet of Moscow.

Prime Minister Tymoshenko is seen as more in line with EU integration. She was one of the main leaders of the 2004 Orange Revolution, which took the Ukraine's old leaders out of power and made Ukrainians believe in a state that could be free of the Kremlin's influence.

Prior to the election, Tymoshenko said she was concerned about the risk of election fraud.

The Central Election Commission said it had received some reports of small errors but that they would not affect the overall outcome of the vote. However, there were tensions in the eastern city of Donetsk, where local officials say hundreds of non-registered Georgian observers showed up to disrupt the polls.

Overall voter turnout was 67 percent. In recent years, Ukrainians have expressed growing disillusionment with politics, as well as anger over the effects of the global economic crisis.

Ukrainian voters showed no mercy to incumbent President Viktor Yushchenko, who was also one of the key figures during the Orange Revolution. Yushchenko came in fifth place with only 6 percent of the vote, a reflection of voter anger over his inability to introduce reforms and effectively tackle corruption. 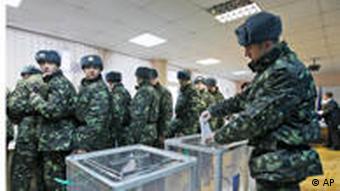 Voter turnout was lower than expected

"I voted for Yanukovich," said 54-year-old voter Volodymyr Efremenko. "I am sick of the Orange leaders. I want stability. These last five years were madness."

As Yanukovich cast his own vote Sunday morning, he appeared confident he would be selected by voters.

"I have the feeling that the Ukranian people want change, and very soon a new stage in the life of our country will begin," he said.

Political rivalries rage as Ukrainians go to the polls

After years of political instability, Ukrainians go to the polls Sunday in a presidential election which they hope will bring strong leadership to the former Soviet state. Russia and the EU will be hoping for the same. (16.01.2010)

At a meeting between the EU and Ukraine, Kiev vowed to avoid a repeat of fuel shortages in Europe this winter by keeping its gas pipelines open. One-fifth of EU gas supplies travel to Europe from Russia via Ukraine. (04.12.2009)

Tymoshenko in defiant mood after first round of Ukrainian elections