Skyrocketing fuel and food prices due to the war in Ukraine have compounded the pandemic-driven economic problems of the South Asian Himalayan nation. 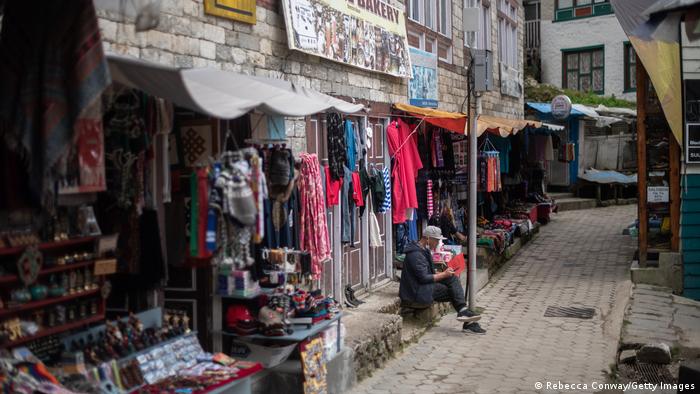 Nepal doesn't boast strong economic ties to either Russia or Ukraine, but the war between those two countries has battered the Himalayan nation's already feeble economy.

Skyrocketing fuel and food prices brought on by the conflict are hitting Nepal's economy , which has already been weakened by a pandemic-induced loss of tourism, a fall in remittances, a widening trade deficit and depletion of foreign exchange reserves.

Even before the war, the country's financial health was not sound, said Roshee Lamichhane, assistant professor at Kathmandu University. Lamichhane points to the drop in tourist arrivals and foreign investment, among other problems. "And the ongoing conflict has further aggravated the situation," she told DW.

Nepal on course for an economic crisis?

The Himalayan nation of 29 million people, sandwiched between giants China and India, relies solely on imports to meet its fuel needs. With the rise in global crude prices following Russia's Ukraine invasion, the state-owned oil monopoly, Nepal Oil Corporation, has been forced to hike prices of petroleum products.

Prices of other commodities like food stuffs, soybeans and palm oil as well as iron, have also surged, making life much tougher for many Nepali people.

Annual consumer price-based inflation accelerated to 7.1% in mid-March, a five-year high, compared with an average of 5.18% over the past three years.

The price rises and the soaring import bill have adversely affected the trade deficit and the value of the nation's currency, prompting fears that it could lead to a balance of payments crisis, which occurs when a nation is unable to pay for its imports or service its foreign debt payments.

Nepal's gross foreign exchange reserves fell to $9.75 billion as of mid-February, down 17% from mid-July last year when its financial year started, Reuters reported. The current reserves are estimated to be enough to support imports for about six months.

Meanwhile, remittances from overseas — which account for as much as a quarter of Nepal's GDP — fell 5.8% to $4.53 billion between mid-July to mid-February, data from the central bank showed. Nepal is the fifth-most remittance-dependent economy in the world, with estimates suggesting that there are about 3 to 4 million Nepali migrants employed across the globe.

In a bid to save the foreign currency reserves, authorities this month imposed curbs on imports of luxury goods like cars, gold and cosmetics.

But Lamichhane is skeptical about the effectiveness of the move in the long run. "This may be helpful to improve foreign currency reserves in the short term. But this is not a sustainable way of addressing the problem," she said, adding that the country needs to increase local production and trade.

Officials say Nepal's GDP target of 7% growth for the financial year to mid-July will likely be missed.

"The current problems are a cumulative result of our inability to invest in wealth creation," Govind Raj Pokharel, a former vice chairman of the National Planning Commission, told DW. "Since the economic reforms of the early 1990s, successive governments have failed to invest in wealth creation and rather relied on the easy flow of remittances and import tariffs to run our economy."

The government has accused Adhikari of leaking sensitive information and formed a panel to probe the charges against him.

But the move drew sharp criticism from some observers and opposition parties.

"Removing the governor at this critical time is a tragedy," Bishwambher Pyakurel, a prominent economist and a former board member of NRB, recently said in a public speech. "It is not good for the country's financial stability."

This view is shared by Pokharel, who said that Deuba chose the wrong approach to the situation.

He argued that the government should have first concluded its investigation into the accusations leveled against Adhikari before taking action against him.

Nepal's economic woes have drawn comparisons with Sri Lanka, which has been hit by severe economic turmoil in recent weeks.

The island nation, which has seen mass protests and calls for President Gotabaya Rajapaksa to resign, has started upon the path to a sovereign default amid an onerous external debt load and a shortage of foreign exchange reserves.

Despite comparisons with the current situation in Sri Lanka, Nepal is not heading down that path, said Pyakurel, who previously served as an ambassador of Nepal to Sri Lanka.

"The situation is still manageable if we receive a bit more remittances and foreign tourists, and if we are able to increase our exports and local production," he stressed.