Ukraine war: Why Nepal chose to go against Russia

Nepal is one of the few Asian countries that deplored Russia's invasion of Ukraine. It is a clear deviation from Kathmandu's nonaligned policy, and will possibly have serious repercussions for the country. 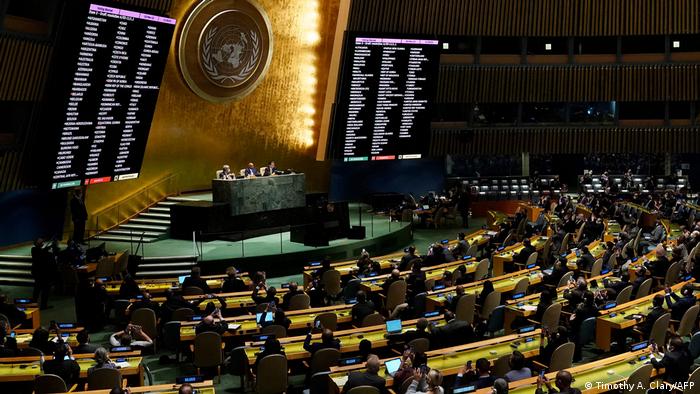 While South Asian countries such as Bangladesh, India and Pakistan abstained from a UN vote condemning Russia's invasion of Ukraine, Nepal, surprisingly, backed the resolution to demand that Moscow pull its troops.

It was rare move for Nepal, which normally maintains a "neutral" stance on global conflicts. The small Himalayan nation also has good ties with both Russia and the West.

Kathmandu's support for Ukraine has triggered a debate in Nepal about the country's foreign policy shift.

Bhutan and the Maldives also voted in favor of the UN resolution, in a move appreciated by the West.

Experts say Nepal's "anti-Russia stance" is a result of its recent tilt toward the United States.

Recently, Nepal's Parliament endorsed a $500 million (€455 million) Millennium Challenge Corporation (MCC) grant from the US. Pro-China parties in the country opposed the move and staged anti-US demonstrations across the country.

Yubaraj Ghimire, editor-in-chief of the Deshsanchar.com news portal, told DW that Nepal is definitely siding with the West, and that indicates a shift in the country's foreign policy.

Soon after the UN vote on the Ukraine war, US Secretary of State Antony Blinken spoke with Prime Minister Sher Bahadur Deuba on the phone and thanked him for his government's decisions to endorse the MCC and the UN resolution.

But some analysts are of the view that Nepal is only trying to minimize its reliance on its powerful neighbors, China and India.

"As a landlocked country sandwiched between two big powers, it's natural for Nepal to feel anxious," Nishchalnath Pandey, director of the Kathmandu-based Centre for South Asian Studies, told DW.

Nepal sees Washington's assistance as a way to keep China and India at bay, as both Beijing and New Delhi have been vying for greater influence in the Himalayan nation.

Russia's invasion of Ukraine has worried many nonaligned nations, which see it as a belligerent act by a big country against its small neighbor. Nepal faces similar threats from China and India.

Experts say it would be difficult for countries like Nepal to remain impartial on events such as the Ukraine war.

"Nepal's support for the UN resolution should not be viewed through the lens of an aligned or a nonaligned conundrum," Indra Adhikari, a strategic analyst in Kathmandu, told DW. " Nepal supports justice, world peace, UN charters and international laws."

Kathmandu's position in such crises has not been consistent, though; for instance, it didn't criticize Russia's annexation of Crimea in 2014 and abstained from a UN vote deploring the occupation. But Adhikari argues it was due to the China-backed communist government in Nepal.

Ghimire cautions that Nepal may face a hard time should Russia emerged victorious in the ongoing conflict with the West and became a major player in South Asia.

Irrespective of the outcome, the Ukraine crisis has aggravated risks for countries such as Nepal that rely heavily on regional and global powers.

The number of people leaving Russian held regions in eastern Ukraine has increased since the so-called referendums calling for a formal annexation by Russia began.