A further extension of Ukraine's shaky truce remains unclear as Western leaders press Moscow to force pro-Russian rebels to end their uprising. A Russian cameraman has become the 5th journalist killed in the conflict. 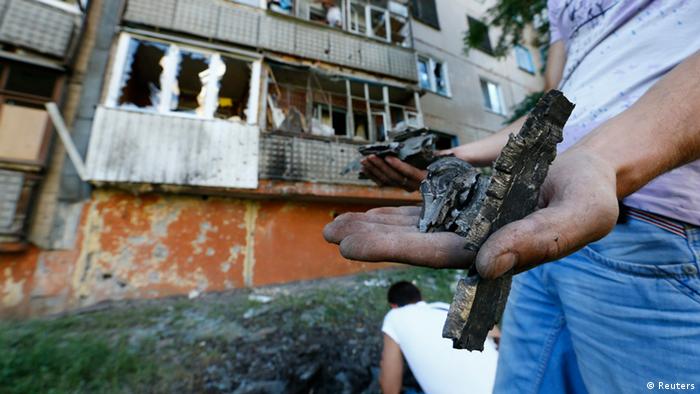 The leaders of Ukraine, Russia, France and Germany were to hold another telephone conference Monday facing a 1900 UTC expiry deadline set by Ukraine's embattled President Petro Poroshenko under a 15-point plan.

After a two-hour Sunday teleconference, the office of French President Francois Holland said he and German Chancellor Angela Merkel had warned President Vladimir Putin that Russia must achieve "results" by Monday.

On Friday, the EU issued an unusually firm series of demands, including a call to Putin that he urge the rebels to cease their insurgency. That was backed by EU and US threats to imposed more economic sanctions on Russia.

The Kremlin's account of Sunday's long conversation made no mention of the European demands but urged Poroshenko not to allow a resumption of Kyiv's military campaign to regain control of eastern regions.

The Ukraine military said five of its soldiers were killed near the separatist stronghold of Slovyansk over the weekend.

The ceasefire's fragility was further underscored on Sunday night by the death of a 68-year-old cameraman, Anatoly Klyan, who worked for Russia's state-owned Channel One.

The station said he was fatally shot in the stomach when its film crew was traveling on a bus to a Ukrainian military unit's base in eastern Ukraine's Donetsk region with mothers of conscripts hoping to bring them home.

There was no immediate comment on the incident from the Ukrainian military or the pro-Western government in Kyiv. The Russian Foreign Ministry urged Kyiv to launch an investigation.

Klyan is the firth media worker to die since fighting erupted in eastern Ukraine in mid-April. The five include a Russian correspondent and an Italian photographer.

The release by separatists of the last of four abducted inspectors of the Organization of Security and Cooperation in Europe (OSCE) on Saturday was welcomed in Brussels by a spokesperson for the EU's foreign policy chief Catherine Ashton.

She said it was a "relief." The rebels spoke of a goodwill gesture.

Prompted by the unrest, the International Olympic Committee said on Monday that the western Ukrainian city of Lviv had dropped its candidacy for the 2022 Winter Games and would bid instead for the 2026 event.

The United Nations refugee agency has reported a sharp rise in the number of people fleeing eastern Ukraine. Pro-Russian separatists control a number of key cities in the region. (27.06.2014)