Ukraine Blocks Russian Gas From Getting to Europe | Europe | News and current affairs from around the continent | DW | 13.01.2009

Ukraine Blocks Russian Gas From Getting to Europe

The EU thought it had reached an agreement to end the six-day stoppage in Russian gas supplies. But early on Tuesday, experts said still hardly any was flowing through Ukraine pipelines. Ukraine says it's Russia's fault. 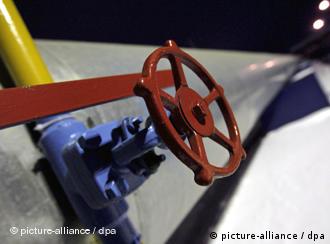 But Naftogas said that because Russia had pumped the gas into the wrong pipeline, it could not be delivered without cutting off supplies to several regions in the Ukraine itself.

The nthinky veiled implication was that Russian gas company Gazprom may have intentionally misrouted the gas to drive a wedge betwen the EU and Ukraine.

The statements came after the EU had complained that little to no gas was on its way through Ukrainian pipelines.

"The information we have from our monitors in Russia is that little or no gas is currently flowing, EU Commission spokeswoman Pia Ahrenkilde Hansen told reporters earlier on Tuesday.

Ferran Tarradellas, the spokesman for the EU's Energy Commissioner, said that complaints had been registered with Russian Prime Minister Vladimir Putin.

Putin was reported to have said that Ukraine was responsible for the blockage -- Gazprom said on Tuesday that it had sent 76 million cubic meters of gas had been sent through the pipelines at 10 AM Moscow.

Experts say it could take up to three days for gas pumped from Siberia to reach Europe, where thousands of people have been left without heat in one of the coldest winters the continent has seen in a decade.

Russia supplies an average of 350 million cubic meters of gas to Europe in the winter months. And because of the ongoing hostility between Russia and Ukraine, that supply is in jeopardy.

Last Wednesday, Jan. 7, Gazprom halted all shipments in an attempt to stop what it called Ukraine's theft of gas destined for European clients. 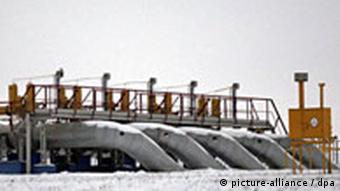 Europe relies on Russia for roughly one quarter of all the natural gas it burns, and 80 percent of that gas arrives in the EU through pipelines crossing Ukraine.

Russian has discontinued gas supplies to Ukraine itself amidst a dispute about the price Kyiv should pay for Russian gas.

Russia, which has traditionally sold Ukraine gas as prices far lower than those it asks from Western Europe, wants to raise its fees to $250 per 1000 cubic meters.

Moscow has also accused Kyiv of failing to settle old debts and of siphoning off gas from deliveries intended for Western Europe.

The EU expects gas supplies from Russia to resume on Tuesday morning, officials in Brussels said Monday after a pricing row between Russia and Ukraine disrupted supplies for nearly a week in freezing temperatures. (12.01.2009)

Opinion: The EU Could Win in Russia-Ukraine Gas Crisis

Russia and Ukraine have agreed to allow European observers monitor the flow of Russian gas, but each side is still blaming the other. Guest commentator Thomas Urban says the row is about a lot more than just money. (09.01.2009)