The UK government has launched its Supreme Court battle over the power to trigger the process of Britain leaving the EU. Much tension surrounds the decision, with both pro and anti-Brexiteers eager to have their say. 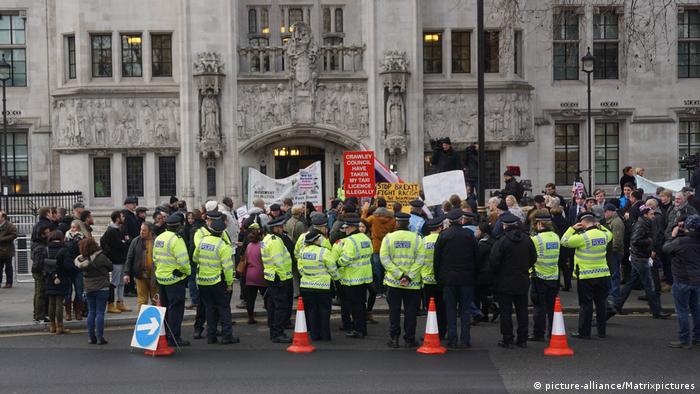 Prime Minister Theresa May's government on Monday launched its legal bid over the power to trigger Article 50 of the Lisbon Treaty, which would formally start the Brexit process.

Court president David Neuberger began the proceedings with a warning about the threats and abuse aimed at those involved in the case. He said the 11 presiding judges would rule without any political bias.

The case has been brought by multiple plaintiffs, but is led by investment fund manager Gina Miller. Their argument is that the triggering Article 50 would strip British citizens of certain rights established under European law. The complainants say only parliament has the power to do this.

'A matter of prerogative'

The necessity to consult parliament would, in the eyes of many analysts, dilute the hopes of many pro-Brexiteers that there might be a speedy "Hard Brexit," because parliament would be in a position to modify parts of the legislation.

Wright said the government had authority over foreign affairs, including the right to withdraw from treaties, under so-called "royal prerogative powers" derived from the monarch, Queen Elizabeth II.

'Not an ancient relic'

This prerogative was "not an ancient relic but a contemporary necessity," Wright told legal representatives, press and public, who were gathered in the ornate neo-Gothic courtroom. Wright said parliament had "multiple" chances to limit the ability of the government to ever trigger Article 50 by its deadline of the end of March, but that opponents not yet done so.

The challenge was necessary after a High Court ruling early in November, which declared that the government needed approval from lawmakers. Tensions have been high in the aftermath, with some politicians and newspapers portraying the legal battle as an effort on the part of establishment judges to thwart the public will.

Protesters both for and against Brexit rallied outside the court for the start of the four-day hearing, some wearing judges' wigs and waving the EU flag. A small group of Brexit supporters waved placards saying: "This is an establishment stitch up."

It is the first time in the seven-year history of the Supreme Court that all 11 justices will be sitting. A verdict is expected in January.