The UK prime minister has told the BBC that the Brexit process will formally begin by the end of March 2017. May has also promised a "Great Repeal Bill." 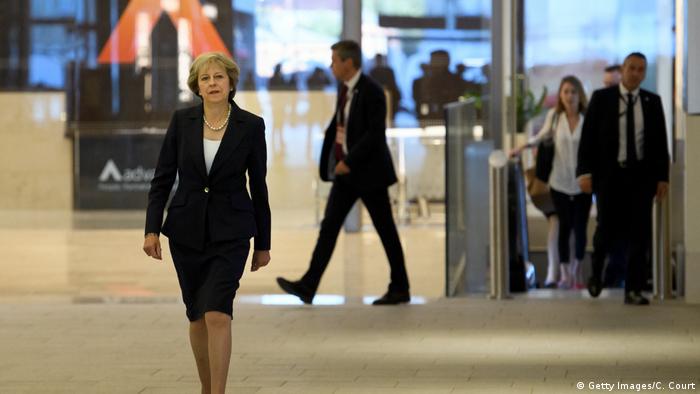 Britain will trigger Article 50 of the Lisbon Treaty - which sets the rules for a two-year negotiating process for a nation leaving the EU - by the end of March, Prime Minister Theresa May said on Sunday.

Speaking on the BBC's Andrew Marr Show, May said: "As you know, I have been saying that we wouldn't trigger it before the end of this year so that we get some preparation in place."

"But yes, I will be saying in my speech today that we will trigger Article 50 before the end of March next year."

The prime minister will further outline her plans for Britain's divorce from the European Union in her keynote speech at the Conservative Party conference in Birmingham later on Sunday.

Earlier, in a front-page story in "The Sunday Times" under the headline "May fires starting gun," May announced her plans to make Britain "a sovereign and independent country" by repealing the act that brought the United Kingdom into the European Union.

"We will introduce, in the next Queen's Speech, a Great Repeal Bill that will remove the European Communities Act from the statute book," said May.

EU law and regulations would instead be enshrined in British law and then removed or kept, depending on what the UK parliament decided.

The act would take legal effect once Britain formally leaves the European Union, the newspaper reported.

'Getting the right deal'

May had been under increasing pressure from EU officials, investors and her own party to provide a more concrete outline of the government's plans for Britain's exit from the union.

However, May did not give more explicit details as to what negotiating approach Britain would take in its divorce talks with the remaining 27 EU states. When asked whether she would curb immigration over access to tariff-free trade with the EU, May said that she only wanted to get the "right deal."

"I want the right deal for trade in goods and services, and what we are doing at the moment ... is listening to businesses here in the UK, listening to different sectors, finding out what it is that is most important to them," she said.

Britain voted to leave the European Union on June 23 in a national referendum. May took over the prime ministership from David Cameron, who campaigned for Britain to remain in the EU and resigned shortly after suffering defeat in the referendum.

The new British foreign secretary has begun a controversial state visit to Turkey. He is scheduled to meet with Turkish officials, including President Erdogan, whom he mocked in an offensive poem earlier this year. (26.09.2016)

UK 'will oppose any idea of EU army' despite impending Brexit

British Defense Minister Michael Fallon has vowed to veto all EU plans for increased military cooperation that could interfere with NATO. The UK is due to begin its departure from the EU within a matter of months. (27.09.2016)

One army, 28 states, not an easy feat - and all that while the UK keeps its foot in the door of the EU, still keen to give its two-penneth. Dr. Jocelyn Mawdsley spoke to DW about the likelihood of an EU army. (27.09.2016)