Britain's High Court has ruled that Prime Minister Theresa May cannot trigger the UK's exit from the EU without parliamentary approval. The government has already said it will appeal the court's decision. 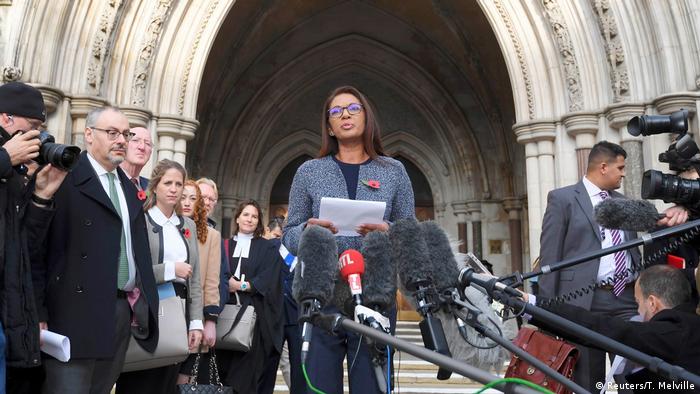 Lead claimant Gina Miller said the Article 50 case is "about process, not politics"

London's High Court ruled on Thursday that Britain's parliament, not only its government, must approve the start of Brexit negotiations to leave the European Union. The decision was a major blow to Prime Minister Theresa May's government.

"The court does not accept the argument put forward by the government," three senior judges said in a statement.

Thursday's verdict was closely monitored by the financial markets and across Europe, as the decision could possibly derail the possibility of "hard Brexit" negotiations.

May has said she intends to trigger Article 50, which marks the start of Brexit talks with the EU, by March 31 next year.

The case centers on whether May can begin negotiating the UK's exit from the European Union without a vote in the House of Commons. At the core of the case is the balance of power between the British government and lawmakers.

The British government announced shortly after the decision that they would appeal against the court ruling. The Supreme Court set aside time to hear the case from December 5-8, according to a government lawyer.

International Trade Secretary Liam Fox said the government was "disappointed" at the decision on Article 50, adding, "The government is determined to respect the result of the referendum."

The government said it does not believe the ruling will delay plans to begin formal negotiations next March.

"We have no intention of letting this derail our timetable," May's spokeswoman told reporters.

British opposition party leaders urged the government to reveal its Brexit negotiating terms with parliament after the court's ruling.

"There must be transparency and accountability to parliament on the terms of Brexit," Labour leader Jeremy Corbyn said in a statement.

A spokeswoman for the European Commission has said the EU body won't comment on the court ruling, saying "this is not for the Commission to speculate."

The head of the German parliament's committee on European Affairs urged that the EU needs clarity on Britain's intentions by March.

"It is absolutely desirable that we have clarity by March on what Britain wants. Otherwise, the chaos caused by former Prime Minister David Cameron with the referendum will affect the elections to the European Parliament in 2019," Gunther Krichbaum told Reuters news agency.

May intended to use royal prerogative - powers officially held by the queen - to invoke Article 50. The historic powers, which have passed to politicians, allow decisions to be made without a vote in Parliament.

Royal prerogative has historically been applied to foreign affairs as well as treaty negotiations.

The High Court rejected the government's argument, saying it "does not have the power under the Crown's prerogative" to start the talks.

The case's claimants - who include a hairdresser, an expatriate living in France and an investment fund manager - argued that since Parliament took Britain into the EU, only Parliament can make the decision to leave. The issue of the referendum vote, a rarity in British politics until a string of such votes took place over recent years, complicates the typical rules designed to rein in Downing Street's powers and empower parliament.

Financial entrepreneur Gina Miller, a lead claimant in the case, said the court's decision "is about all of us...It's about our United Kingdom and all our futures."

She also said the case was not an attempt to stop Brexit but rather to ensure parliamentary sovereignty.

Even if the Supreme Court decides that the government does not require parliament's approval, the UK could still change its mind on leaving the EU - even after triggering the talks, according to the man who drafted Article 50.

"You can change your mind while the process is going on," John Kerr, a former British ambassador to the EU who drafted the article, told the BBC. "During that period, if a country were to decide actually we don't want to leave after all, everybody would be very cross about it being a waste of time. They might try to extract a political price, but legally they couldn't insist that you leave."

In a June 23 referendum, British voters decided by a narrow majority of 51.9 percent to leave, with 48.1 percent of voters wishing to remain in the EU.

Since most members of the House of Commons campaigned for the UK to remain in the EU, there is speculation that they could push for a softer exit or even delay it altogether.

May's Conservatives have only a wafer-thin majority in the house, and some members of the party - for instance europhile Ken Clarke - have hinted that they would not support the Brexit motion if it came to a vote in parliament.

Britain's vote to leave the European Union will have a negative impact on gross domestic product in Germany, a survey by an economic think tank has predicted. It expects exports to shrink considerably next year. (25.10.2016)