The UK announced it would allow the resettlement of some Hong Kongers in January after a Chinese crackdown on dissent in the former British colony. London says Beijing is dishonoring its obligations to citizens. 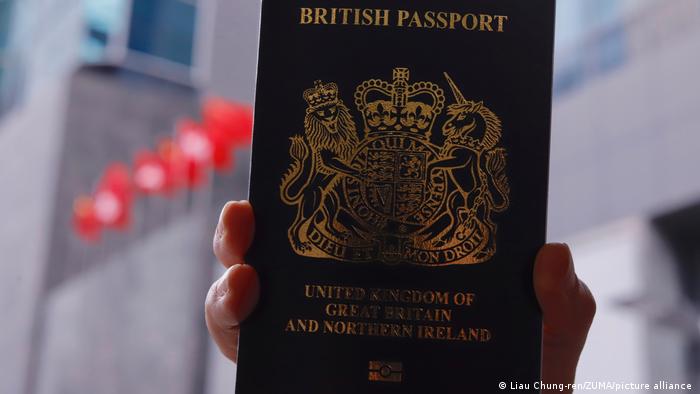 The UK, which held control of Hong Kong until 1997, extended the offer of resettlement and eventual full citizenship to BN(O) passport holders and their dependents in January in response to a sweeping national security law that most observers say facilitates harsh crackdowns by Beijing on dissenting voices.

"By the end of September, 88,000 people had applied for visas under this scheme. On behalf of the government, I welcome them warmly to the UK," British Foreign Secretary Liz Truss wrote in a new UK government report on Hong Kong.

"The erosion of liberty in Hong Kong is an affront to freedom and democracy" she wrote in a tweet announcing the report, which is published every six months.

When the resettlement plan was originally announced, UK officials estimated that up to 154,000 Hong Kongers could seek to relocate in the first year, with as many as 322,000 to follow over the next five.

The UK scheme was introduced after Beijing declared it would no longer recognize the BN(O) passport as a legal document.

The UK report accuses mainland Chinese and Hong Kong authorities of using the national security "law and related institutions against all opposition, free press and civil society in Hong Kong."

In an introduction to the report, Truss wrote: "I urge the Chinese and Hong Kong authorities to return to the framework for Hong Kong that China committed to in the Joint Declaration, under which it guaranteed that rights and freedoms of Hong Kongers would remain unchanged for 50 years from 1997."

Beijing originally trumpeted a policy of "one country, two systems," promising that Hong Kong would continue to enjoy freedoms that residents had become accustomed to under British control. Lately, however, Beijing has shown little tolerance for freedoms — conducting harsh crackdowns and mass arrests on pro-democracy organizers and protesters.

China has remained unfazed by broad global condemnation of its suppression of Hong Kong's massive pro-democracy movement as well as reported human rights abuses in its western Xinjiang region.

A poll conducted by the Migration Observatory at the University of Oxford earlier this year found that nearly one-third of BN(O) passport holders were considering relocating to the UK.