The first vote under Hong Kong's newly revamped election system will ensure that "patriots rule Hong Kong," by keeping out any "anti-China" elements. 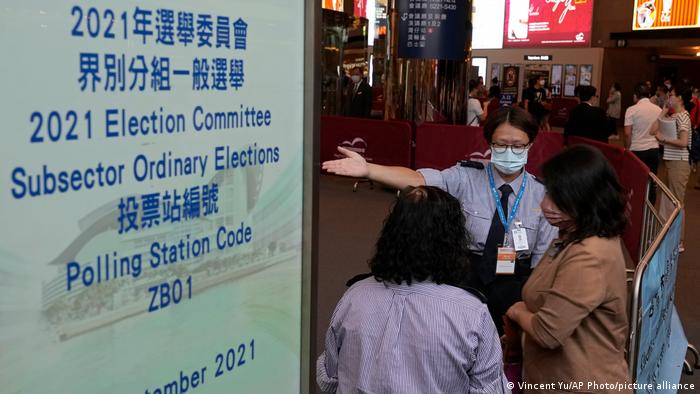 Fewer than 5,000 people, mostly belonging to Hong Kong’s pro-establishment circles, are voting on Sunday to send candidates to an election committee that will pick the city’s next leader as well as determine half of the legislature.

The newly revamped electoral system has been put in place with legislative changes to guarantee that "patriots rule Hong Kong," keeping out any "anti-China" elements and ensuring the election of pro-Bejing politicians.

"I doubt very much that another government or country will allow the public election to their local legislature of people whose mission is to undermine the national interest or national security," she said.

While a small and vocal opposition was tolerated for years after Hong Kong’s 1997 handover from the UK to authoritarian China, the financial hub has seen large-scale pro-democracy movements over the last two years.

Beijing responded with a severe crackdown, overhauling the city’s political system to ensure that only those who are loyal to China are allowed to stand for office.

Sunday’s poll is the first under the new system for Hong Kong.Voting on Sunday will determine members of a committee will go on to appoint 40 of the city's 90 legislators in December this year. Thirty other legislators will be chosen by special interest groups and 20 will be directly elected.

Next year, the committee will also choose the city’s next Beijing-approved leader, a position that is currently held by Lam.

In line with the new electoral system that allows "only patriots" to govern Hong Kong, pro-democracy candidates were nearly absent from this election.

As China regulates the political processes taking place in Hong Kong, most prominent democratic activists and politicians have been jailed or have fled the city.

Four activists from the League of Social Democrats, a pro-democracy political party, staged a small protest near a polling station in Hong Kong’s Wan Chai neighborhood. The activists displayed banners that criticized using this "small circle election" to showcase "public opinion." The police stopped and searched the protesters.

Under the latest changes, democratic representation has been reduced drastically. Instead, a vetting mechanism has been introduced for election candidates and winners, removing all likelihood of the opposition exerting serious influence.