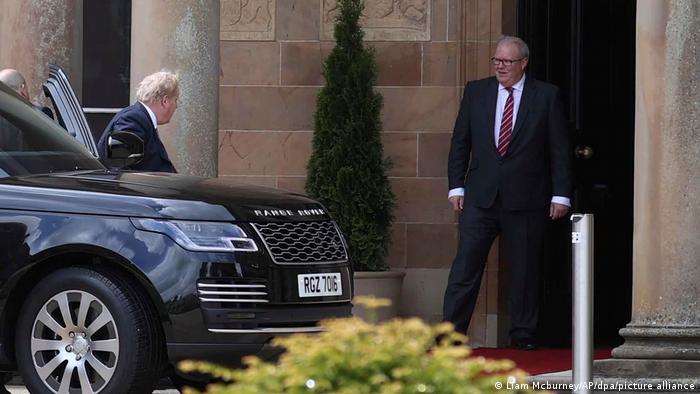 Boris Johnson traveled to Belfast on Monday, trying to convince local politicians to form a government in the wake of recent elections. Not for the first time in the past seven years or so, Johnson's push for Brexit — and the terms he ultimately agreed with the EU for Northern Ireland's status — have unsettled the always fragile politics in Northern Ireland.

He met with all the five largest parties, but the talks with the leaders of the Catholic nationalist Sinn Fein party and the Protestant pro-UK Democratic Unionist Party (DUP) to urge them to form a government were the most anticipated. These are the two parties required in order to set up any government in Northern Ireland, with only one of them currently saying it is willing to do so.

Sinn Fein was the clear winner of Northern Ireland's May 5 parliamentary elections, but the DUP has blocked the formation of a power-sharing government as stipulated in the Good Friday Agreement, a 1998 peace deal, citing issues with the so-called Northern Ireland Protocol of the Brexit agreement signed by the UK and the EU when the UK left the bloc in 2020.

"There is no disguising the fact that the delicate balance created [by the peace agreement] in 1998 has been upset," Johnson wrote in an article published in the Belfast Telegraph newspaper ahead of the meetings. "One part of the political community in Northern Ireland feels like its aspirations and identity are threatened by the working of the Protocol.''

DUP and Johnson dislike EU accord, Sinn Fein approves of it

However, while the DUP does object to the Northern Ireland Protocol, saying it has created friction in trade between Northern Ireland and Great Britain, Sinn Fein largely approves of the accord, which also ensured Ireland's internal border could remain open.

"We have said directly to him that the proposed unilateral act of legislating at Westminster is wrong. It seems to us absolutely extraordinary that the British government would propose to legislate to break the law," said Sinn Fein leader Mary Lou McDonald, leader of the opposition in the Republic of Ireland, following her meeting with Johnson.

"We've had no straight answers really from the British prime minister," McDonald said.

Prior to the meeting, Sinn Fein Northern Ireland leader and First Minister-elect Michelle O'Neill said the UK government was, "playing a game of chicken with the [European] Commission right now, and we're caught in the middle."

O'Neill said the DUP was holding Northern Ireland "ransom" and that Johnson needed to stop pandering to them.

Brussels has already said the treaty can't be renegotiated, but it is willing to act flexibly to ease the burden of checks on goods entering Northern Ireland from the UK.

"Any unilateral action by Great Britain on Protocol — which would undermine its international legal obligations — clearly [is] not welcome, all the more so in these difficult geopolitical times," European Council President Charles Michel said Monday.

"Northern Ireland is about compromise and trying to find middle-ground positions that everybody can live with, to maintain political stability," Simon Coveney, the Republic of Ireland's Foreign Affairs Minister, said in Brussels.

"That's the approach we need to take at the moment, not a unilateral action or threats of unilateral action, which I think is deeply unhelpful. To act unilaterally to break international law, to not respect the democratic decisions in Northern Ireland would make matters significantly worse, not better, in terms of trying to solve the problems of the protocol," Coveney said.

Speaking to reporters in Belfast on Monday, Johnson said his government would prefer not to tear up the accord unilaterally, but said that the threat of doing so was necessary.

"We would love for this to be done in a consensual way with our friends and partners, ironing out some of these problems," he said. "But to get that done, we need to proceed with a legislative solution at the same time."

The Protocol, and the checks on some goods going between Northern Ireland and the rest of the UK that come along with it, was the trade-off for ensuring that Northern Ireland could effectively remain with its open border to the EU's single market and customs unions.

Ireland's open border, and the rights of people on either side of it to seek whichever citizenship they prefer and to move freely between the two sides, were core components of the Good Friday peace accord.

"We will set out a more detailed assessment and next steps to parliament in the coming days, once I return from discussions with the local parties," Johnson promised Monday, saying Foreign Secretary Liz Truss would lay out the case to Parliament on Tuesday.

Paul Givan has announced his resignation in a row over the Northern Ireland Protocol, prompting calls for early elections in the tense British province.