British fishers are less than delighted about Boris Johnson's Brexit deal, even though he said that as a result of the agreement they will be able to catch and eat "prodigious quantities of extra fish." 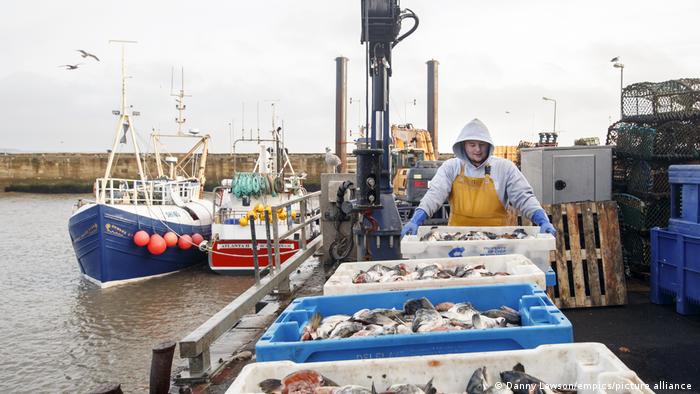 Fishing bait being unloaded at Bridlington Harbor in Yorkshire

British fishery industry leaders have accused Prime Minister Boris Johnson of caving in on the final Brexit trade deal. Johnson admitted that the UK had conceded ground on access to fishing waters, but said he could assure the "great fish fanatics in this country that we will, as a result of this deal, be able to catch and eat quite prodigious quantities of extra fish."

The industry is, however, largely unconvinced. UK Fisheries boss Jane Sandell told reporters that, while leaders were pleased that the deal would bring some certainty to the industry, "we're still looking for the 'prodigious amounts of fish' we were promised, and for us it changes nothing."

The UK leaves the EU's Common Fisheries Policy on December 31. In the new trade agreement, the UK and Brussels agreed that 25% of EU boats' fishing rights in UK waters would be transferred back to the UK over the next five and a half years. The UK had originally demanded cuts of 60-80%.

Going forward, the two sides will negotiate future fishing rights, with the deal allowing for tariffs on the other's fish exports in the event of "serious disagreements."

"Britain's fishing industry will once again be betrayed by a Conservative government and prime minister," Mike Hookem, a former member of the European Parliament from the UK Independence Party, told DW. "You really could not have negotiated a worse deal for Britain's fishermen and UK's coastal communities. And it shows that the promise of 'taking back control and once again becoming a sovereign coastal nation' was nothing more than hot air."

The UK has very rich waters that comes from biological mechanisms in breeding grounds along the northern French coastline, a shallow, sandy strip that stretches to Denmark.

Britain has an exclusive economic zone (EEZ) that reaches up to 320 kilometers (250 miles) from its shores and has long agreed to share management of this via the European Common Fisheries Policy (CFP), which allocates quotas of different stocks to each nation's fishing fleet. On top of the CFP, there is limited access for certain EU vessels into Britain's territorial waters between six and 12 miles from the coast.

Danish, Dutch and French fishing vessels are particularly dependent on fish caught in UK waters — each of them catch more than 100,000 tons of the UK's fish every year.

EU fishermen make an annual total catch of €650 million in British waters, 40% of the value of fish caught in Britain's EEZ, according to a European Parliament report.

For the French industry, fish caught in British waters account for 20% of total annual value, while the figure for Belgium is 50%, Ireland 35%, Denmark 30% and the Netherlands 28%. Spain, Germany and Sweden also send ships into British waters.

To confuse things further, quota hoppers — foreign-owned ship owners using British registration to use UK waters — hold 13% of UK quotas. In England, more than half the quota is under foreign ownership, an investigation last year found.

Reaching a deal was seen as crucial for Boulogne-sur-Mer, France's largest fishing port, where 5,000 jobs depend on an industry that generated revenues of €80 million in 2019. But Mayor Frederic Cuvillier has warned the agreement leaves French fishermen wondering how it will affect them. "Who, for example, will be handling the controls? And over what time?" Cuvillier asked in an interview with Europe 1 radio, reported by Reuters news agency.

'It's a relief that there is an agreement'

Irritation within the UK

An EU official said that fisheries were "one of the areas which we had particularly in mind" when the bloc designed the Brexit Adjustment Reserve of €5 billion for countries and industries affected by Brexit.

Spain's regional government in Galicia, for example, said the deal will cost its regional fleet €190 million. Others are preparing their negotiating positions.

"One thing we're going to have to do is negotiate very hard in the new year to make sure that there's fair burden sharing across Europe, that Irish fishermen aren't disproportionately affected," Irish leader Leo Varadkar said.

Scotland's first minister, Nicola Sturgeon, has complained that promises made to the Scottish fishing sector had been broken, saying it was "yet another example of Tory governments forcing Scotland in the wrong direction." Fishing communities in Scotland voted strongly in favor of leaving the EU, despite 62% of the overall population of Scotland backing the remain campaign.

Elspeth Macdonald, chief executive of the Scottish Fishermen's Federation, said the deal did not appear to deliver on the industry's aspirations. "After all the promises given to the industry, that is hugely disappointing," she told reporters.

Small fry in the overall economy

Fishing is only a tiny part of the total economy both in the UK and in the EU. The UK's fishing and fish processing industries employ 24,000 people and contribute £1.4 billion to the economy, according to a House of Commons research library briefing. That is a tiny portion of its total economy worth around £2.2trillion. It also only involves around 0.1% of the UK's workforce.

At the same time, the financial services industry was worth £126 billion and the automotive industry £49 billion, according to the Office for National Statistics.

"Although fishing makes up 0.08% of GDP that has to be seen as the result of 47 years of lack of investment and involvement with the EU Common Fisheries Policy. It was hoped with the return of UK waters and a renaissance in UK fishing industry fortunes would increase," Hookem said.

Why the fate of Scotland's salmon depends on its forests

Salmon are in decline around the world, from overfishing, disease and climate change. In Scotland, conservationists believe that forest restoration could be key to their survival.

Oceans cover the majority of the earth's surface and are crucial to our survival. Global warming, overfishing and pollution are all huge threats. But how can we safeguard such a vast and important resource?

The UK has announced that four 80-meter vessels have been put on standby to defend its waters. The ships will have the power to stop and seize any EU fishing boats found within Britain's exclusive economic zone.

A bad catch for Europe's fishermen