UK Conservative Brexiteer: PM May′s heart ′was never in leaving′ | World| Breaking news and perspectives from around the globe | DW | 05.06.2019

Ahead of the Conservative leadership contest in the UK, pro-Brexit MP Mark Francois has criticized outgoing Prime Minister Theresa May and said the withdrawal agreement with the EU is "dead as a dodo."

Conservative pro-Brexit UK politician Mark Francois has criticized outgoing British Prime Minister Theresa May, saying she failed and that both her party and the House of Commons had lost faith in her.

Talking to DW's Conflict Zone host Tim Sebastian in London, Francois said May "was always a Remainer; her heart was never in leaving."

"She always saw it [Brexit] as a kind of damage-limitation exercise," he added.

Francois is a deputy chair of the European Research Group (ERG), an influential bloc of backbench Conservative parliamentary representatives who are opposed to the UK's membership in the EU.

The ERG's prominent leader, Jacob Rees-Mogg, has said he will support former Foreign Secretary Boris Johnson in the upcoming Conservative leadership contest to determine May's successor, who will also become the UK's next prime minister.

Francois told Sebastian he has not decided whether he would vote for Johnson, who was one of the key faces of the Leave campaign supporting the UK's departure from the EU.

What Francois did confirm is that he will certainly vote for a Brexiteer: "There is no way I will vote for a Remainer."

During the interview with DW's Conflict Zone, Francois also criticized the withdrawal agreement negotiated between May's government and the EU, calling it a "surrender document."

"The problem with the so-called withdrawal agreement in a nutshell is that we didn't withdraw," he said. "We still remain because of the backstop in a customs union, we wouldn't have run our own trade policy, we couldn't have done international trade deals with America or China or Brazil."

Francois described the deal as "dead as a dodo," adding that "it is never going to go through" Parliament.

When Sebastian pointed out that the EU is not offering any other deal, Francois said politicians should accept that the current one is dead and should instead focus on discussing the future relationship between the EU and the UK.

"We were always going to have to at some point agree the future relationship," the politician said. 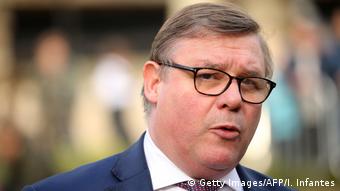 Francois argued that the UK and the EU should start discussing a comprehensive free trade agreement, adding that the EU and Canada signed one in 2016 that could be used as a starting point.

"You have a template that you know, by definition, the EU did accept because they signed it," he stressed. "You start with that and then you see whether you can modify it."

In the meantime, he said he would be "perfectly prepared" to leave the EU on World Trade Organization (WTO) terms while negotiations are taking place, referring to trade conditions agreed by member countries at the intergovernmental organization that regulates global trade.

Pressed by Sebastian on warnings from business related to Britain leaving the EU in this way, the Conservative politician quickly dismissed them as "project fear nonsense."

The EU has insisted that the terms of its future relationship with the UK would only be discussed following an agreement on the UK's exit from the bloc.

Francois also indicated that the recent European elections, in which Nigel Farage's Brexit Party took first place in the UK, gave politicians a mandate to "leave, if necessary, with no deal."

But he insisted that that the "best outcome is not a no-deal outcome; it's a free trade agreement outcome."

Sebastian asked Francois what he thought about people changing their mind over Brexit and quoted Conservative parliamentary representative and former Brexit secretary David Davis, who said, "If a democracy cannot change its mind, it ceases to be a democracy."

Francois argued that "the people voted" and "took a decision."

He added that there are members of the House of Commons who "felt the people had made a dreadful mistake and have spent the last three years digging their heals in, doing everything they can to frustrate the will of the people." 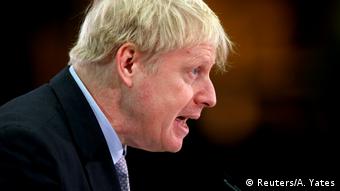 "This has morphed from leave versus remain to the people versus the establishment," he said. "And in the end, in a democracy, the people must prevail."

The British people voted to "take back control of our own destiny and our own government," argued Francois. "On the 31st of October, that is precisely what we are going to do."

This refers to the end of the current extension period. First, however, the Conservatives will vote to pick Theresa May's successor.

UK lawmakers have twice rejected Theresa May's Brexit deal, but the threat of not leaving the EU at all has worried hardliners in her party. Are the die-hards giving up? DW asks pro-Brexit MP Nigel Mills. (21.03.2019)

With just weeks to go before the UK's planned exit from the EU, many issues remain unsolved. Is it time Brussels was more flexible over Brexit? An MEP from the European Parliament's Brexit Steering Group talks to DW. (06.03.2019)