Has Brussels pushed Brexit talks to the brink? | Europe | News and current affairs from around the continent | DW | 06.03.2019

With just weeks to go before the UK's planned exit from the EU, many issues remain unsolved. Is it time Brussels was more flexible over Brexit? An MEP from the European Parliament's Brexit Steering Group talks to DW.

An orderly departure for the UK from the EU cannot come at any cost, a member of the European Parliament's Brexit Steering Group has said.

With only a few weeks remaining before Britain leaves the European Union, MEP Philippe Lamberts told DW's Conflict Zone that proposed technological solutions to questions about the future of the border between the UK and the Republic of Ireland were "fantasy." He also said that supporters of a hard Brexit wanted a "backdoor into the single market, uncontrolled, unpoliced."

Wrangling and uncertainty over arrangements to avoid a hard border between the Republic of Ireland and Northern Ireland after Brexit have mired talks between the UK and Brussels. 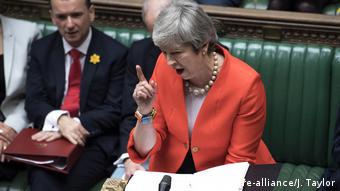 British MPs will vote again on Theresa May's Brexit deal before March 12, after it was defeated by a historic margin in January

In the event of a "no-deal" Brexit, where Theresa May's proposed deal is not approved by British lawmakers and there is no extension to the UK's departure date of March 29, Lamberts said there would be border controls but "elsewhere than on the intra-Irish border."

After decades of sectarian conflict in Northern Ireland and years of relative peace that followed the signing of the Good Friday Agreement in 1998, the possibility of checkpoints on the border again has raised fears of a return to violence.

The Irish government has committed to not supporting "the reemergence of border infrastructure on this island," its foreign minister has said. The country's tax authorities have said they will have 400 extra customs officers ready by the end of March in case of no-deal, but that they would not be deployed on the border.

If checkpoints were necessary, who would put them up? Lamberts told DW's Tim Sebastian: "Do you believe that we are going to let any good enter the European Union just unchecked? And so if the Irish don't do it, then of course people on the continent will need do it." 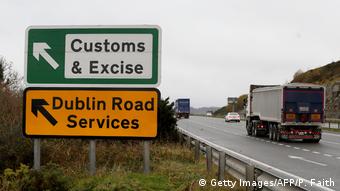 On whether the Republic of Ireland was being forced to choose between the Good Friday Agreement and protecting the single market, Lamberts told DW's Tim Sebastian, "We will decide for what we are responsible."

"Extreme Brexiteers," such as the conservative European Research Group (ERG), were "reneging" on the agreement, Lamberts said.

Tim Sebastian asked the MEP if he was dictating to the UK that, if it wanted an extension of the withdrawal process, it must hold a so-called "people's vote" with an option to remain in the EU. But Lamberts denied this, saying he was supporting the desire of allies in the UK to have a second vote. 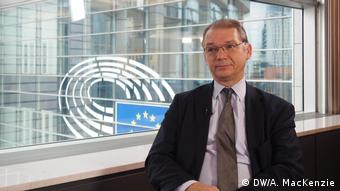 "I'm just speaking out my mind. I'm not instructing the Brits what to do. What I'm saying is that if they want an extension, they need to say for what and it can be a people's vote, it can be a new election."

More of the same from the EU?

As the conversation turned to human rights, Lamberts said he was not happy with the legitimacy the recent EU-League of Arab States summit in Sharm El-Sheikh appeared to give to Egypt's President Abdel Fattah Al Sisi. The MEP also raised the issue of arms deals with Saudi Arabia.

"I have taken risks in my own country saying that we should have an arms embargo against Saudi Arabia, depriving the main Belgian weapons producer of its main client. We have taken political risks to stand by our values," the green politician said.

May has outlined a plan to change or remove the Northern Ireland backstop from the EU withdrawal agreement. A parliamentary attempt to take control of the withdrawal process appears to be gaining traction. (20.01.2019)