Prime Minister Theresa May has expressed disappointment over the court's ruling and said her government would seek permission to appeal. Campaigners say the UK-Saudi arms deal violates international humanitarian law. 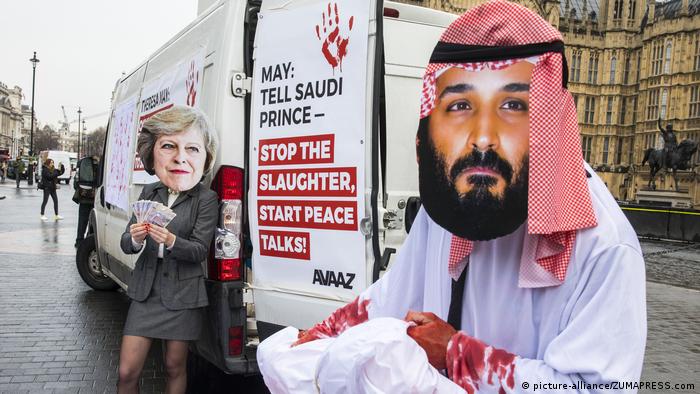 A court of appeal in London on Thursday declared the sale of weapons by the UK to Saudi Arabia unlawful because of the Yemen conflict.

The court accepted the challenge brought by Campaign Against Arms Trade (CAAT) that accused the UK government of licensing the arms sale when there is a clear risk that the weapons use could breach international humanitarian law.

In its judgment, the court ruled that "the process of decision-making by the government was wrong in law in one significant respect."

Judges said licenses must be reviewed but would not be immediately suspended.

CAAT research coordinator Sam Perlo-Freeman told DW that the verdict shows the "the government must now go back and retake all its decisions based on a proper assessment of the evidence of past violations of International Humanitarian Law (IHL) by the Saudi-led coalition."

British Prime Minister Theresa May said she was disappointed and that her government would appeal.

"This judgement is not about whether the decisions themselves were right or wrong, but whether the process in reaching those decisions was correct," a spokeswoman for the Department for Trade said.

"We disagree with the judgment and will be seeking permission to appeal."

In its legal challenge against the UK-Saudi arms deal, CAAT argued that British bombs and fighter jets are fueling violence in Yemen.

Yemen has been torn apart by a protracted civil war between the internationally recognized government of President Abed Rabbo Mansour Hadi and the Shiite Houthi rebels.

In support of the Hadi government, Riyadh launched an air campaign against the Houthis in March 2015. Saudi Arabia accuses Iran of backing the rebels, who have made significant territorial gains in the impoverished Middle Eastern country.

Perlo-Freeman commented that the UK ruling was a "moral victory," that "adds to the growing momentum, in the US and Europe, to halt arms sales to the Saudi-led coalition."

In their Thursday judgment, three senior judges said the British government had "made no attempt" to find out whether the Saudi-led coalition had breached international law.

The court said that the government must assess future risks of humanitarian law breaches when deciding whether to allow arms sales.

The UK has licensed more than GBP 4.7 billion ($5.9 million, €5.28 billion) of arms exports to Riyadh since the start of the Saudi military campaign in Yemen in March 2015.

According to British media, weapons sold to Saudi Arabia include Typhoon and Tornado fighter jets, as well as precision-guided bombs.

"The UK should withdraw the direct on-the-ground military support to the Saudi Air Force and Coalition provided by BAE Systems, the MOD, and other UK arms companies," said CAAT's Sam Perlo-Freeman.

Human rights activists are outraged by the ruling and plan to appeal Britain's highest court. The judges ruled there was insufficient evidence of a "clear risk" of the weapons being used for "serious" rights breaches. (10.07.2017)