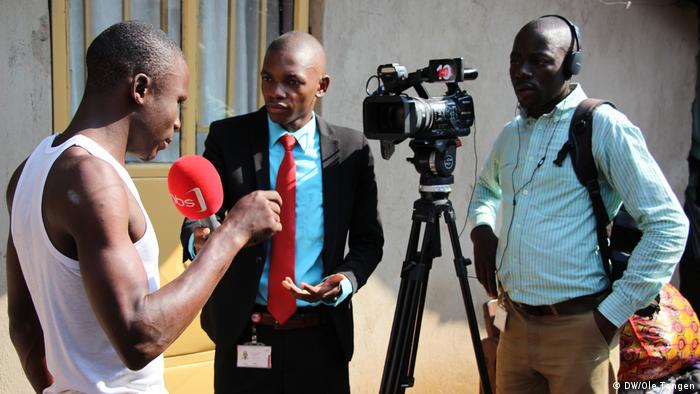 Ugandan security officers "slapped, punched, and kicked" prominent journalist Julius Ocungi as he was taking photos of police officers shutting down a local bar in the northern district of Kitgum, according to the New York-based media rights body Committee to Protect Journalists (CPJ).

The incident, one of several such assaults being reported throughout Africa, occurred on March 19, CPJ said. It said police refused to take any formal complaints from Ocungi, who is a bureau chief at the Uganda Radio Network news agency.

Another journalist, Kenneth Okuru, told DW that police officers beat him after he had taken photos of the officers "manhandling people."

"Three of the local defense unit members followed me and ordered me to delete the photos that I had taken. Actually, one of them beat me with a baton on my leg, and up to now I still feel the pain," Okuru said.

A local rights body, the Ugandan Human Rights Network for Journalists (HRNJ-Uganda), tells DW it has recorded 12 cases of assaults against journalists since the lockdown measures began on March 19.

"We have witnessed an outbreak of attacks on journalists like ... the coronavirus epidemic," Robert Sempala, national coordinator of the group, told DW. "We have only been able to have one of the perpetrators arrested; the rest are still at large."

The reported assaults come despite the fact that Uganda's President Yoweri Museveni has declared the work of journalists to be an essential service in the fight to curb the coronavirus outbreak.

Cases of police brutality are on the rise in African countries that imposed lockdowns, according to several local and international rights bodies. The mistreatment has been meted out not only to journalists, but also to civilians. 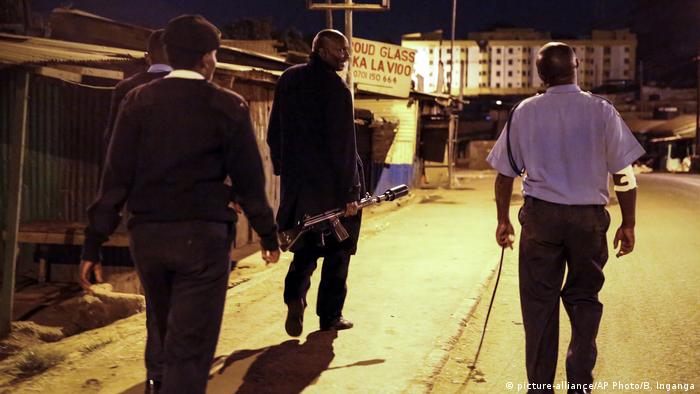 Nigeria, South Africa, Uganda and Kenya are some of the countries in which security agencies have used brutal means to keep people off the streets. "There are so many reported cases of human rights abuses, including outright murder and killing of Nigerians in the name of keeping them at home," said Auwal Musa Rafsanjani from the Abuja Civil Society Legislative Advocacy.

"We think this is a shame and outrageous that coronavirus didn't kill Nigerians, but security agents are killing Nigerians," a visibly angry Rafsanjani told DW.

Media rights groups worry that security agents are making it a common practice to assault journalists who refuse to delete photos and footage of officers caught in the act of beating civilians.

"One of the challenges journalists have been reporting to us is that when they try to interact with authorities at the local level to seek justice for what has happened to them, they are getting frustrated," CPJ's  Mumo said.

According to the body, the assaults against journalists continue unabated. "In our most recent report, we spoke to six journalists who, between the period of March 19 and early April, were beaten, were intimidated by security personnel. It's worrying that these cases we documented seem to be the tip of the iceberg," Mumo said.

In Kenya, a cameraman for NTV, Peter Wainaina, was also beaten as he was filming police officers in the coastal town of Mombasa chasing civilians to enforce the nationwide nighttime curfew. Wainaina told the website kenyan.co.ke that he had been surprised by the "brutality" of the policeman, as he had been doing nothing but what he was supposed to do as a journalist.

Zimbabwean journalist Terence Sipuma also told the southern African regional media watchdog MISA that police officers assaulted him while he was on his way to report on Zimbabwe's 21-day lockdown.

"They asked where I was going, and the moment I showed them my journalism accreditation, I was asked to lie down and was beaten. They accused me of exposing them. They took my phone away and promised to beat me more if they found videos or pictures of that operation," Sipuma told MISA Zimbabwe.

The media watchdog also reported another police assault on journalist Panashe Makufa in a suburb of the Zimbabwean capital, Harare, earlier this month.

"He was taking pictures of a police operation to disperse people in Kuwadzana as part of their enforcement of the national lockdown. When the police approached him, Makufa produced his accreditation card, but they disregarded it as expired. The four police officers instructed Makufa to get into their police vehicle, where he was assaulted by two officers and forced to delete pictures before being dropped off at Kuwadzana 2 shops," MISA Zimbabwe reported.

Back in Uganda, President Museveni urged security personnel not to use excessive force to implement his COVID-19 guidelines. Police spokesperson Fred Enanga told DW that individual police officers found guilty of assault would be prosecuted.

"We have said that there is no police officer who is above the law; journalists should always thoroughly document actions against them by police officers," Enanga said. "We have not seen any direct video showing a police officer directly manhandling a journalist that we can authenticate."

However, CPJ's Mumo says out of the six journalists assaulted, "four of them suffered injuries severe enough that they had to go to hospital and at least two of them were hospitalized for several days."

There are several videos published on Twitter of Ugandan police officers and army personnel beating journalists, some made even before the COVID-19 outbreak. Only a few of the officers involved have faced disciplinary action, according to HRNJ-Uganda.

Alex Gitta in Kampala, Uganda, contributed to this report.

Uganda coronavirus restrictions leave many out on a limb

Uganda's Karamoja region is rich in natural resources. With better security, major mining conglomerates have come in and the labor union, Karamoja Miners Association, ensures they do not grab lands. (09.04.2020)

Fear-mongering and homemade remedies: Fake news is getting in the way as Africa responds to the COVID-19 pandemic. DW correspondents around the continent asked experts to debunk a few of the damaging coronavirus myths. (21.03.2020)