Thursday evening’s Super Cup could be played in front of 20,000 fans as UEFA and the Hungarian authorities press ahead with their plans. But many Bayern fans are not making the trip following a spike in COVID-19 cases. 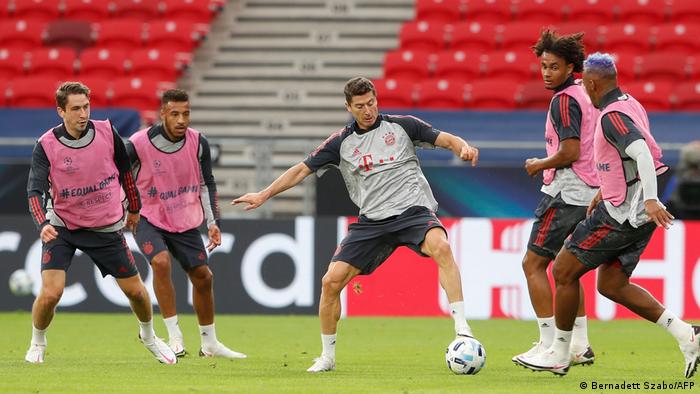 Bayern Munich will play their first game in front of fans in over six months this Thursday, but many of the 2,100 Bayern supporters that had planned to travel are now canceling their trips to the Hungarian capital.

This comes after Germany declared Budapest a high-risk area for COVID-19 after a recent spike in cases, despite all foreign arrivals having to provide a negative test for the virus.

Each team had 3,000 tickets allocated with Sevilla already returning 2,500 of their allocation to UEFA. And with many Bayern fans opting not to go, Bayern captain Manuel Neuer is not sure what kind of environment awaits them in the stadium.

"We do not know what to expect," Neuer said, ahead of the annual game between the Champions League and Europa League winners.

"Our eyes are on the match," he said. "We will see how it will be in the stadium."

Coach Hansi Flick echoed his captain. "We have come here to play football, decisions are made elsewhere," he said. "We have a goal — to lift the UEFA Super Cup."

Despite many Bayern delegates also not travelling, including president Herbert Hainer, the recently-crowned European champions are focused on winning their second piece of silverware in four weeks and fourth this year under Flick.

Robert Lewandowski is expected to start despite picking up an ankle injury against Schalke, a game David Alaba missed with a thigh strain but has recovered from. Javi Martinez, who is expected to leave Bayern Munich in the coming days and return to his former club Athletic Bilbao, has travelled and is an option for Flick.

Jamal Musiala, who became the youngest goalscorer in Bayern's history with the eighth goal against Schalke, has also travelled and is likely to start on the bench again, while Kingsley Coman is short of match fitness following a period in quarantine.

Sevilla beat Inter Milan in the Europa League final in Cologne in August, and their coach Julen Lopetegui said: "We are happy to be here. We're really eager to be able to play in such a final and compete for a title. We want to show our best game, our best performance to be able to survive against a team as strong as Bayern."

Football fans in Hungary allowed back into stadiums

Hungary became the first country in Europe to allow football clubs to reopen their stadiums to fans, however, under certain conditions due to the coronavirus.