Football fans in Hungary allowed back into stadiums

Hungary became the first country in Europe to allow football clubs to reopen their stadiums to fans, however, under certain conditions due to the coronavirus. 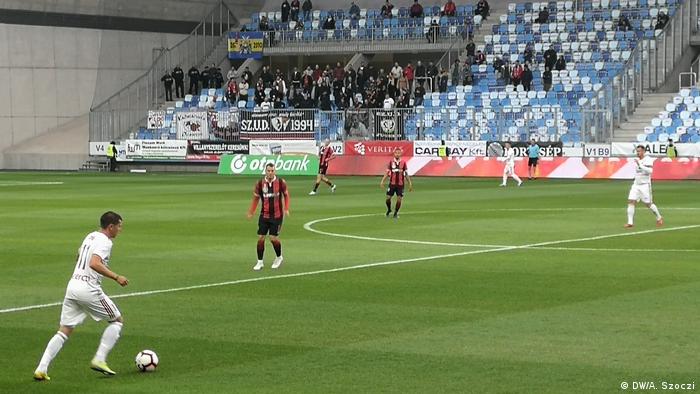 The crowds were small this weekend, even for Hungarian standards.

At the only match in Budapest this weekend, the official attendance for Budapest Honved vs. Debrecen was 700, although it looked closer to 400. Only Honved season-ticket holders and traveling Debrecen fans were allowed in. Most games under normal conditions see between 1,500 and 3,000 spectators.

The conditions that the government announced mid-week to allow attending matches are that fans must keep three empty seats between themselves and stay one-and-a-half meters away from each other at all times. Furthermore, the Hungarian Football Federation has asked clubs to consider making it mandatory to wear face masks and that ticket owners buy their tickets online or be somehow registered. Clubs, however, do not have to follow those guidelines. 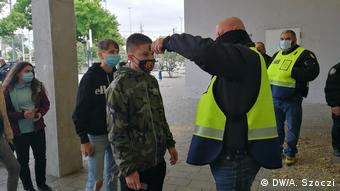 Fans have their temperatures taken before entering the stadium

"We've waited for this a long time," said Hediof Budapest who came with her daughter and son to watch the game. "We're very happy. We hope this will be a success and that fans can continue going to games. It was also important to go to a match during this time of COVID-19."

Hedi added that she and her family had watched Bundesliga games when the German league restarted in mid-May, and had noticed that the players hadn't been playing for two months. She said the same goes for the Hungarian league, but hopes that the level of play will soon improve.

Another Honved fan, Zoltan, said you could sum up what it means to him coming back to a stadium in one word: "Everything. It means everything to us. Football means everything to us. Kispest (a nickname for Honved) is our life. We love it. We don't watch foreign leagues. We just watch the Hungarian league. And this team is our heart and soul."

League play had been suspended in Hungary since mid-March with games resuming 10 days ago. They were however, closed to the public until this weekend. 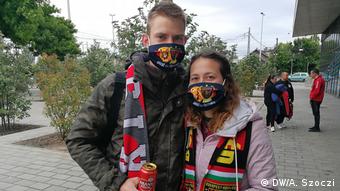 Honved fans Karoly and Andrea at the game

Karoly who came with his girlfriend Andrea, said he wasn't sure about the rule of not sitting together. "I consider that rule total nonsense. They want you to be apart one-and-a-half meters, so you go to the stadium holding hands, and then once you're in you're supposed to be apart. I understand that they don't want fans to be grouped together, but fans do group together, and that individuals can't sit together frankly doesn't work."

Not so distanced fans

Most fans at the game did observe the restrictions except in two areas, where the hardcore Honved fans sat and where the visiting fans from Debrecen were. In both areas, people sat together and cheered, despite the stadium announcer continually reminding fans to observe social-distancing rules. 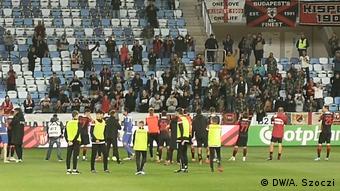 Honved players celebrating with their fans

The players certainly appreciated the fans' presence. Honved goalkeeper Robi Levkovich, who was brought on in the second-half said: "Of course, it's more exciting, more emotional, it's more of a real show than to play without fans. Everyone can see that you play much better with our fans. The level of play is better. It pushes you more.  You play not just for yourself, you play for them. They shout at you and you give them more."

The restart of the Hungarian League has also had some international success. The Serbian pay-TV sports network Arena has bought the rights to Hungarian First Division games, broadcasting them now to Serbia, Croatia, North Macedonia, Bosnia and Herzegovina and Montenegro.

Whether this is a win-win situation for Hungarian football remains to be seen. Honved fans certainly went home happy after watching their team defeat Debrecen 3-1, but with some fans not following the rules during a pandemic, the question of a relapse hangs in the air.