With an embassy in Tel Aviv, the UAE has plans to broaden economic ties with Israel after tourism, aviation and financial services deals. Israel's president called diplomatic ties to the UAE a milestone toward peace. 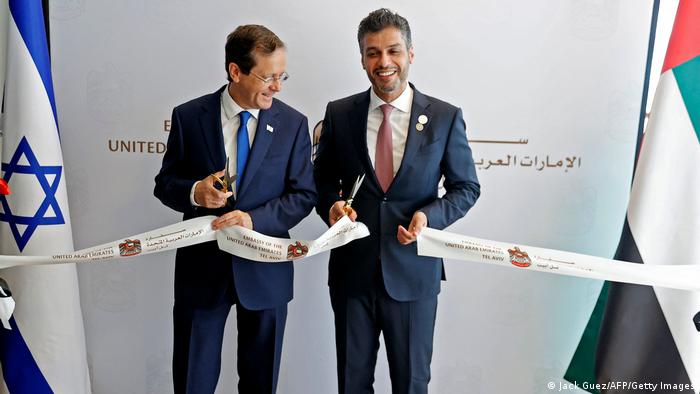 The United Arab Emirates officially opened an embassy in Israel on Wednesday, becoming only the third majority Arab nation to have full diplomatic relations with the Jewish state.

New Israeli President Isaac Herzog said the Tel Aviv embassy inauguration was "an important milestone in our shared journey toward a future of peace, prosperity and security for the Middle East."

Two weeks earlier, Israel opened its embassy in Abu Dhabi, signaling the potential beginning of a new era of cooperation for the two countries initiated by a US-brokered deal in September 2020.

What are the effects of official diplomatic ties?

After decades of hostility, Israel and the United Arab Emirates (UAE) agreed to establish relations last September as part of an agreement called the Abraham Accords.

Israeli Foreign Minister Yair Lapid then visited the UAE in June, opening the embassy in Abu Dhabi and the consulate in Dubai.

The location of the embassy in Tel Aviv is aimed to avoid the controversial section of East Jerusalem annexed during the 1967 Six-Day War. Most states maintain embassies in Tel Aviv because of Jerusalem's disputed status, which makes it one of the hardest issues to solve in negotiations over peace in the Middle East and a potential two-state solution that would see the creation of an independent Palestinian state.

How have the Arabs reacted?

"The UAE and Israel are both innovative nations, we can harness this creativity to work towards a more prosperous and sustainable future for our countries and our region," al Khaja said at the embassy opening.

He added it was "a base for our task to continue to build on our new partnership, to seek dialog, not dispute, to build a new paradigm of peace and to provide a model for a new collaborative approach to conflict resolution in the Middle East.''

Palestinians have been outraged by the renewal of diplomatic relations with the UAE, which was followed by similar deals with Sudan, Bahrain and Morocco.