Tusk calls for 'moderation' ahead of Brexit talks

European Council President Donald Tusk has called for "discretion" and "mutual respect" between Britain and the EU ahead of British elections in June. He said deep disagreements could make Brexit talks "impossible."

"These negotiations are difficult enough as they are - if we start arguing before they even begin, they will become impossible," Tusk said Thursday, cautioning that "the stakes are too high to let our emotions get out of hand.

"Because at stake are the daily lives and interests of millions of people on both sides of the Channel," he added. "We must keep in mind that in order to succeed we need today discretion, moderation, mutual respect and a maximum of goodwill."

Tusk's comments came hours after European Parliament President Antonio Tajani said "no one is trying to influence the outcome of the election campaign in the United Kingdom."

Illusions or threats against Britain?

May held a press conference outside Downing Street on Wednesday and accused politicians in Brussels of making "threats against Britain" over Brexit talks. Her statement may have been in reference to comments made by German Chancellor Angela Merkel in the Bundestag last week, when she warned some in Britain appeared to have "illusions" about how Brexit talks would be conducted. 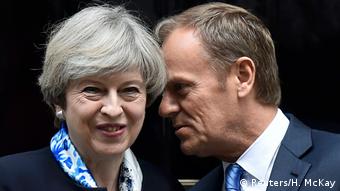 Germany daily "Frankfurter Allgemeine Zeitung" (FAZ) also gave a damning account of a dinner last week between May and European Commission President Jean-Claude Juncker. The daily FAZ reported that Junker had told May that Brexit could not be a success.

The FAZ alleged that Juncker had reportedly said May was in a "different galaxy." May had initially dismissed the FAZ report as "Brussels gossip" before making her accusation of EU interference in the election.

Her Conservative Party has a double-digit lead over its main opposition, the Labour Party led by Jeremy Corbyn. The Brexit negotiations are expected to begin after the June 8 election.

Brexit talks need to be concluded by March 30, 2019, when - barring unforeseen circumstances - the UK becomes the first state to leave the European Union.