Turkey's tourist industry is in crisis

Resorts around Antalya are feeling the effects of the dispute between Russia and Turkey after a Russian fighter plane was shot down near the Turkish-Syrian border: There are less tourists and business are moving out. 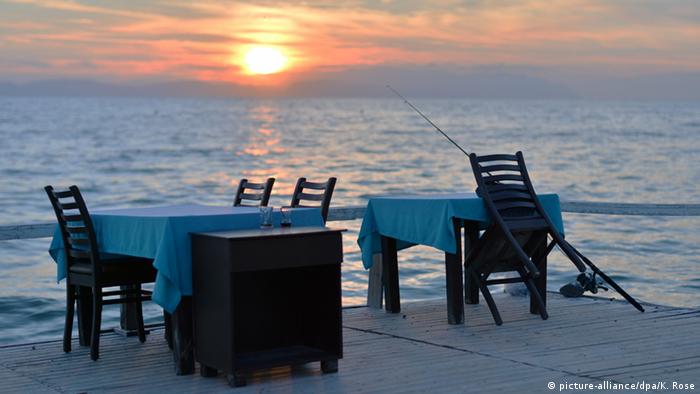 Some hope things will be back to normal by the spring, others are less optimistic. The dispute between Moscow and Ankara is dividing opinions in Antalya.

Maria is from Russia. She runs a boutique in Turkey but now she wants to sell up and move to Europe with her Turkish husband. She says tourism in Antalya has ground to a halt. Maria has been living in Kemer, a resort normally popular with Russians, for five years.

Turkey is a popular tourist destination. A total of 41 million people visited in 2014. With around four million vacationers annually, the largest number of tourists are Russians, followed by Germans. Three million of them flock to the region around the city of Antalya every year.

6,000 trips to Turkey have already been cancelled 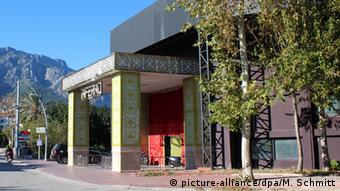 The Inferno club in Antalya

Most of them stay at one of the luxury hotels on the coast around Kemer, spend their evenings in popular clubs like Inferno or Aura and shop in exclusive boutiques.

Maria says most of her customers were Russians but they have stopped coming since Russian President Vladimir Putin recently announced sanctions against Turkey after the Russian fighter plane was shot down. According to Russian sources, some 6,000 trips to Turkey have been cancelled since the announcement was made.

Maria thinks things between the Russian and Turkish leaders should calm down. And says Erdogan should have taken a more diplomatic course and avoided a confrontation.

Bayram Acar's store has signs in Russian and English. He sells leather jackets and his business is one of a handful that are still open on Kemer's shopping street. Most of the stores are closed up and the streets are empty. 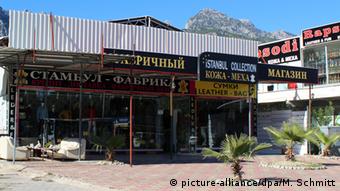 Some stores have signs in Russian and English

This is not unusual in winter, because it is low season. But this November, Turkey profited from the crisis between Russia and Egypt. After a Russian passenger jet crashed over the Sinai Peninsula, Russian experts claimed the crash was due to a bomb which exploded on board of the aircraft and all flights from Russia to Egypt were cancelled. Instead of flying to the Red Sea, Russian tourists headed to the Mediterranean in Turkey.

Acar says his store did well in November and he was grateful because sales had been poor throughout 2014 due to an economic downturn in Russia. He says things will return to normal next year.

Many traders agree, but Mehmet Ali Gültekin, an entrepreneur, says that is naive. He says politics will affect tourism in the region on the long term. Most travel operators are already planning 2016 and don't count on tourists from Russia.

Tourists from Europe in the spotlight

Gültekin organizes hunting excursions in Antalya and works with 57 travel agencies. Unlike many colleagues, he doesn't only specialize in tours for Russian tourists, but also caters to visitors from Iran and Europe.

Now everyone is competing to attract tourists from Europe. But a downturn will still be felt because Russians buy luxury items and book excursion tours, while Europeans tend to be older and stay in their hotel resorts. Local official sources expect a temporary financial crisis in Antalya, but say this will not affect Turkey as a whole. 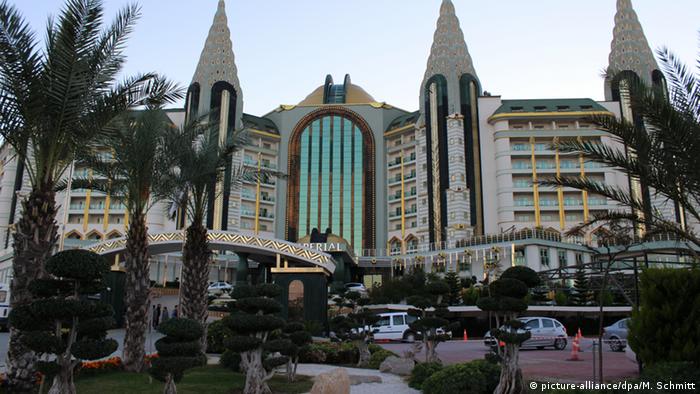 The Imperial Luxury Hotel in Antalya

Hotel owners are also remaining cautious in their economic forecasts. The motto here is "let's just wait and see." The Kremlin Palace is a hotel in Kundu, east of Antalya. Here on the coast, all the hotels have grand sounding names like Venetian Palace or Imperial. Many facades are decorated in gold.

A lot of Russians have cancelled their bookings at the Kremlin Palace. But there are still plenty of people around. Business people are attending a conference and athletes are training for a tennis tournament. Some are lying beside the pool and enjoying the view of the nearby replica of Moscow's Saint Basil's Cathedral. The building is somewhat smaller but otherwise it looks pretty much like the original in Moscow.