The Turkish president has accused Greek Prime Minister Kyriakos Mitsotakis of telling the US to not sell fighter jets to Turkey. He has called off planned talks between Athens and Ankara. 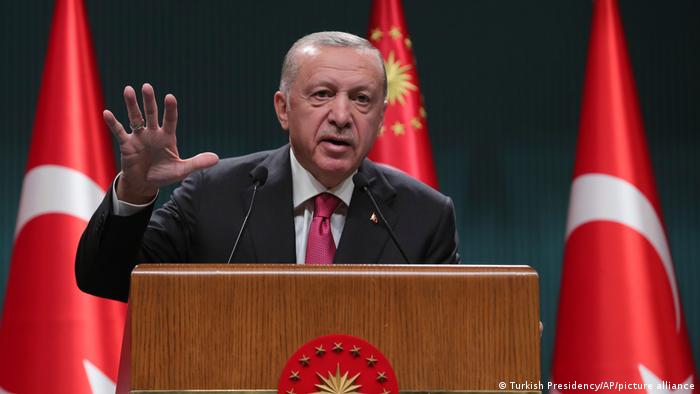 Erdogan said there was 'no longer anyone called Mitsotakis in my book,' accusing the Greek prime minister of urging the US not to sell Turkey warplanes

Turkish President Recep Tayyip Erdogan said on Monday that he will no longer talk to his Greek counterpart, Prime Minister Kyriakos Mitsotakis, following the Greek leader's visit to Washington.

Erdogan claimed that Mitsotakis had called on US officials not to sell F-16 fighter jets to Turkey, as well as accusing Athens of harboring followers of his declared nemesis, the US-based Muslim cleric Fethullah Gulen.

The Turkish president also called off a planned meeting between the governments of the two neighboring countries.

"This year we were supposed to have a strategic council meeting. There's no longer anyone called Mitsotakis in my book," Erdogan told reporters after a cabinet meeting. "I will never accept having such a meeting with him because we walk on the same path as politicians who keep their promises, who have character and who are honorable."

What did Mitsotakis say to anger Erdogan?

The source of displeasure appears to be a speech by Mitsotakis to the US Congress on May 17 where the Greek prime minister warned the US not to create a new source of instability during the crisis in Ukraine.

"The last thing that NATO needs at a time when our focus is on helping Ukraine defeat Russia's aggression is another source of instability on NATO's southeastern flank," Mitsotakis told US lawmakers.

"And I ask you take this into account when you make defense procurement decisions concerning the eastern Mediterranean," he added. 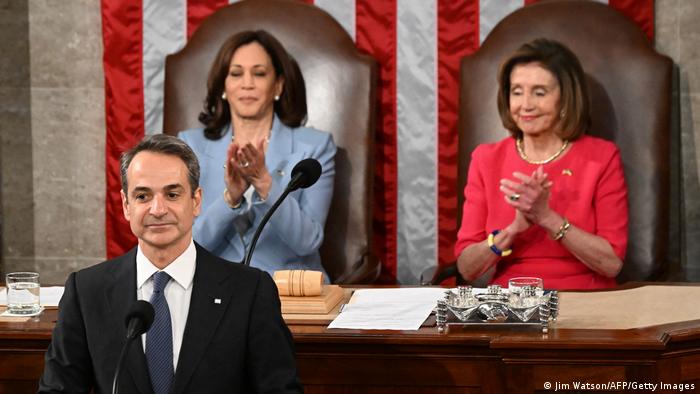 "We had agreed to not include third countries in our dispute with him. Despite this, last week, he had a visit to the US and talked at the Congress and warned them not to give F-16s to us," Erdogan said of the Greek prime minister's comments.

Turkey was kicked out of the purchasing program for the US' next generation multirole combat jet the F-35 in 2019, because Ankara insisted on also purchasing the Russian S-400 air defense system. The US said at the time that it was not acceptable for Turkey to purchase Russian weaponry specifically suited to counter F-35s and also to acquire the new jets.

As a result, Erdogan's government and military is doubly keen to modernize its air force with the older F-16s instead.

Greek government spokesperson Yiannis Economou said Athens "will not get into a confrontation of statements with Turkey's leadership.''

"Greek foreign policy is strongly founded on history, international law and our alliances, however much that may annoy some,'' he said.

Both Athens and Ankara are members of NATO, but the two have a long history of tense relations that have at times threatened to break out into conflict.

The two have serious disputes about the status of Cyprus and they came close to an open conflict over sources of natural gas in the Eastern Mediterranean last year.

Varosha: A Glimmer of Hope for Cyprus

Turkey has claimed that Greece is militarizing Aegean islands, in violation of international agreements — a claim rejected by Athens.

Greece is one of the biggest spenders on defense within the NATO alliance and one of the few, along with the US, that has managed to keep defense spending above the 2% threshold.

Attempts to normalize relations began last year but have yet to make much headway.

Turkey is also in the process of resisting Finland and Sweden's bids to join NATO, accusing them of harboring what it considers "terrorists," typically a reference to Kurdish people who fled or left Turkey. There, too, analysts suspect that expediting a purchase of US F-16s could be among the concessions Erdogan's government is in fact seeking.