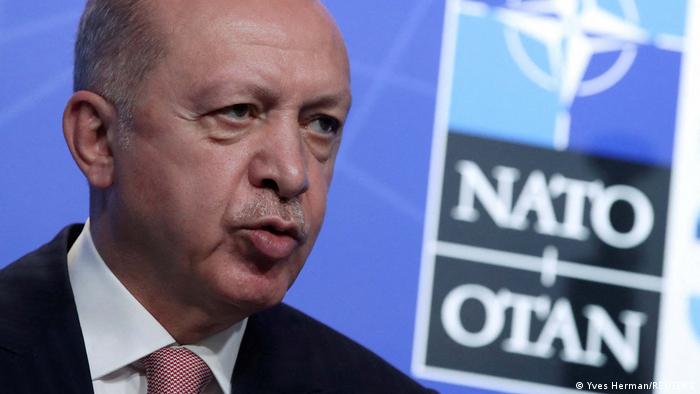 Turkish President Recep Tayyip Erdogan on Saturday told the leaders of Sweden and Finland that he would block their bid to join NATO unless they halt what he considers their support for "terrorist" groups threatening Turkey's national security.

The two Nordic countries this week formally submitted their application to join the military alliance, ending their neutral stance in the wake of Russia's invasion of Ukraine.

The move sparked a threat by Turkey to object to their accession, as NATO membership requires the consent of all 30 existing members.

Will Turkey's opposition to Sweden and Finland's NATO membership be overcome?

Erdogan's office said the president had shared his concerns in a call with both Swedish and Finnish leaders about the Kurdistan Workers' Party (PKK) militant group — which Turkey's government has been fighting since the 1980s — and the Gulen movement, which Ankara accuses of orchestrating a 2016 coup attempt.

Turkey has designated them as terrorist organizations and accused the Nordic countries of harboring people linked to both groups.

Erdogan told Finnish President Sauli Niinisto that failing to deal with terror groups that threatened a NATO ally would not suit the spirit of the military alliance, his office said.

He also told Swedish Prime Minister Magdalena Andersson that "Sweden's political, financial and weapon support to terrorist organizations must end," according to comments released by Ankara.

Erdogan also said an arms exports embargo by both countries imposed on Turkey after its 2019 incursion into Syria against the Kurdish People's Defense Units (YPG) militia should be lifted.

The YPG is a key US ally in Syria against the "Islamic State" militant group.

What was the reaction from Sweden, Finland?

The Nordic leaders responded to the separate calls on Twitter, with Andersson saying she looked forward to "strengthening our bilateral relations, including on peace, security, and the fight against terrorism."

Niinisto said he told Erdogan that "as NATO Allies Finland and Turkey will commit to each other’s security and our relationship will thus grow stronger. Finland condemns terrorism in all its forms and manifestations."

Why are Sweden and Finland seeking to join NATO?

In 1949, when NATO was set up to counter the threat of the Soviet Union, Sweden and Finland both opted to stay out.

The two countries said they wanted to avoid any unnecessary provocation of Moscow.

Finland shares an 810-mile (roughly 1,300-kilometer) border with Russia, was once ruled by Moscow and fought off Soviet forces during World War II.

Sweden has held a neutral security policy since the 19th century and has sought nuclear disarmament and dialogue, while carving out a role for itself as a mediator in international conflicts.

The nations moved ahead with their membership a Russia's neighbor's invasion of Ukraine, which had unsuccessfully sought to join NATO.

Public support for joining NATO has surged in both countries since the conflict in Ukraine began.

What has been the response to the membership bids?

Though Turkey surprised NATO allies last week by objecting to the accession, Western leaders have expressed confidence that Ankara's objections can be overcome.

German Chancellor Olaf Scholz said he was confident that Sweden and Finland would succeed in joining the defense alliance and that Berlin was doing everything possible to make that happen.

In a tweet following his call with Erdogan on Saturday, NATO Secretary General Jens Stoltenberg said the "security concerns of all allies must be taken into account and talks need to continue to find a solution."

Turkey has been a NATO member since 1952. Its early entry bolstered the alliance's southeastern flank, and its relevance to the organization has grown amid conflicts in Afghanistan, Iraq and Syria. However, its decades of bloody conflict with Kurdish insurgents, mainly in the southeast, have often posed problems for NATO allies.