Turkey announced it will begin patrols with Russian troops in northern Syria. The statement from President Erdogan follows Turkey and Russia's deal to withdrawal Kurdish fighters in the area. 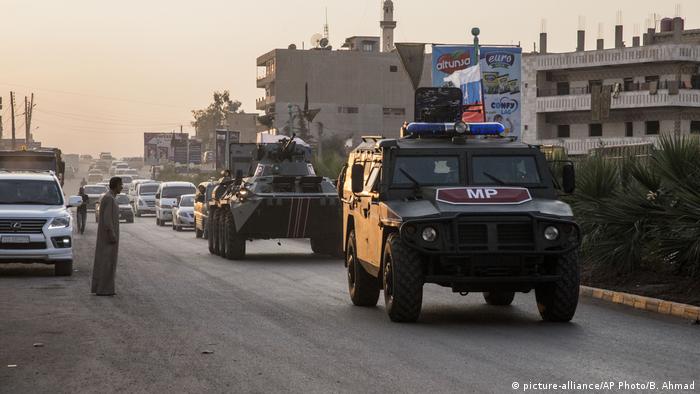 The patrols will initially begin within a 7 kilometer (5 miles) zone south of the Turkish border.

The statement comes a day after the expiration of the 150-hour agreement for Syrian border guards and Russian military police to remove Kurdish forces 30 kilometers from the Turkish border in northeast Syria.

Erdogan on Wednesday disputed the claim by Russian military police that the Kurdish YPG militia, which is allied with the US, had left the strip.

Turkey reserves the right to launch another operation against the YPG in the area, said Erdogan.

Turkey considers the militia, the main component of the Syrian Democratic Forces (SDF), a terrorist group linked to the Kurdistan Workers' Party (PKK), which has fought a nearly four-decade war for Kurdish rights against the Turkish state.

According to a statement released by the Turkish Defense Ministry on Tuesday, the Turkish-Russian patrols "will be initiated in the west and east of the borders of current Operation Peace Spring at a depth of 10 kilometers."

The joint operations will include mine clearances and reconnaissance activities.

The upcoming Russia-Turkey operations were initially agreed in talks between Russian President Vladimir Putin and Erdogan in Sochi on October 22, in addition to the 150-hour period that expired on Tuesday.

The leaders met to discuss a solution following Turkey's offensive into the strip of land in northeast Syria.

Turkey entered the area to drive out Kurdish fighters after US President Donald Trump announced the withdrawal of US troops from the region earlier in October.