The Turkish leader expressed optimism after the meeting, despite differences between the two countries on various geopolitical issues. 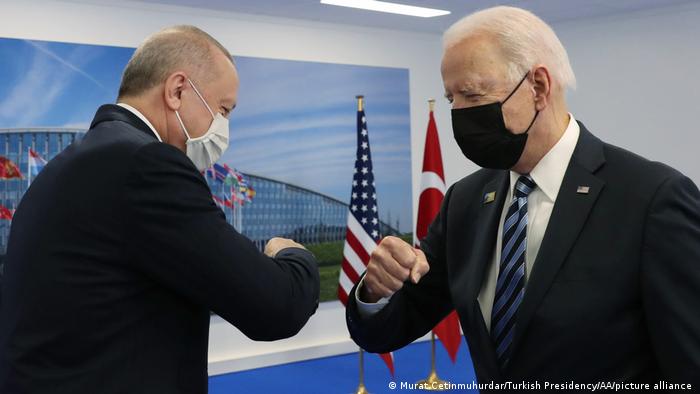 The two leaders met last week during a NATO summit in Brussels.

"We believe that we have opened the doors to a new era that is based on positive and constructive ties with the US," Erdogan said after a cabinet meeting.

"We are determined to gain the greatest benefit possible for the country from the positive tone of our talks with Biden, strengthening our channels of communications with the US," he added.

At the same time, Erdogan said he did have one request of the Biden administration: "Turkey's only demand is that its economic and political sovereignty are respected in every field, and that it is supported in its struggle with terror organizations."

How do Biden, Erdogan differ on geopolitical issues?

The US has also strongly opposed the sale of Russian S-400 missiles to Turkey. The missiles would bolster Turkey's air defenses as it grapples with various security threats in the Middle East.

Erdogan at times has also criticized US support for Israel. The Turkish president has frequently shown overt support for the Palestinians.

Tensions were also icy earlier this year after Biden recognized the killings of Armenians during the Ottoman Empire as genocide.

The two countries have, however, cooperated in other areas, such as the NATO withdrawal from Afghanistan. Biden and Erdogan have agreed to allow Turkey to have a leading role in securing the airport of Afghanistan's capital, Kabul, after the pullout of international troops later this year.