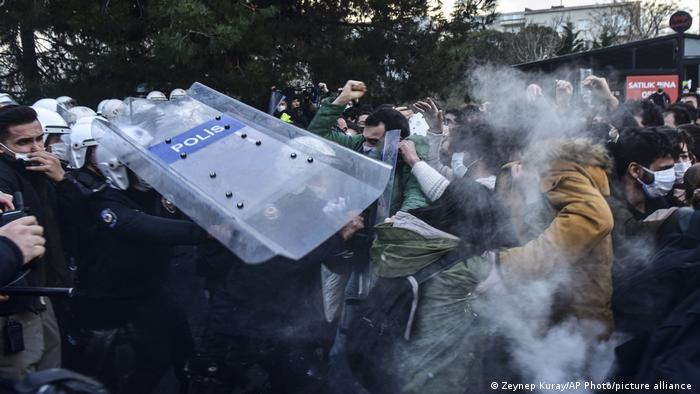 Protesters called for the release of detainees

Hundreds of students at Istanbul's Bogazici University took to the streets again on Wednesday to march against President Recep Tayyip Erdogan's appointment of a new university director.

Turkish police arrested 14 protesters in the second such demonstration in three days, raising the number of detainees to 36.

Protesters described the appointment of Melih Bulu as undemocratic, accusing Erdogan of seeking to crack down on academic freedom.

Istanbul Governor Ali Yerlikaya on Wednesday announced a ban on "all kinds of meetings, demonstrations and marches" on the European side of the city, where Bogazici University is located. Yerlikaya said the ban was to curb the spread of COVID-19. 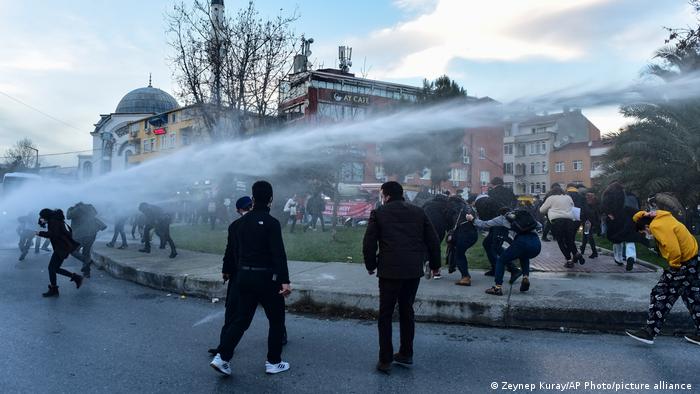 Turkish authorities fenced off the university campus to prevent the planned demonstration from going ahead. Organizers then regrouped.

More than a thousand protesters rallied along the Bosphorus River, before crossing to the Asian side of Istanbul, according to French news agency AFP.

The demonstrators called for the students' right to elect a university director and for the release of detainees.

Protesters also raised rainbow flags in support of LGBT rights, and some chanted Metallica songs in response to an interview in which Bulu said he listened the heavy metal band.

Protests 'need to be crushed'

Director of the ultranationalist MHP party and Erdogan's ruling coalition partner, Devlet Bahceli, called for a crackdown, saying the demonstrations "need to be crushed" before they expand.

"Those who are trying to strangle Turkey by taking this rector's nomination as an excuse are terrorists' pawns and separatists dressed as students," he said.

Bahceli said that protesters were "trying to create another Gezi uprising," referring to the 2013 protests.

Erdogan has not yet made any public statements about the Bogazici University protests.

Turkey has a record of cracking down on protests, including banning pride marches in Istanbul and using tear gas to disperses women's rights marches, according to a Human Rights Watch report.

Traditionally elections have determined the directors of Bogazici University — since the 1990s and up until 2016.

Since 2018, Erdogan has had the power to appoint public university directors, thanks to the executive presidential system.

Istanbul's renowned Bogazici University has been known for promoting leftist causes that have made it a government target in the past. Turkish authorities arrested several of its students in 2018 after a demonstration against Turkey's military involvement in Syria.

As a consequence of the new bill being passed by parliament, the Turkish government will expand its control over civil-society groups on counter-terrorism grounds.