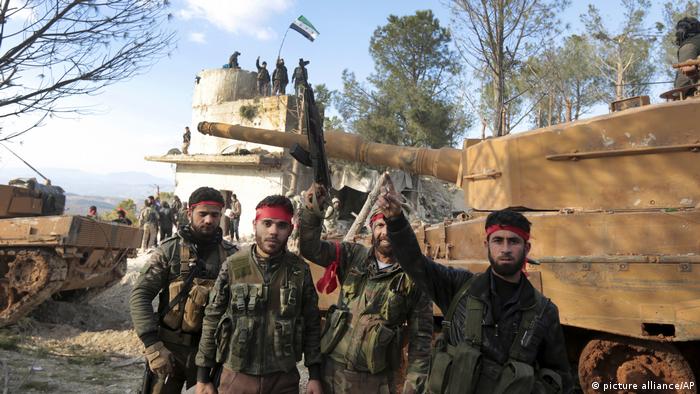 Turkish soldiers and local forces backed by Ankara said on Sunday they had seized a key outpost from Kurdish militia in Syria, pressing ahead with an offensive that has increased tensions between Turkey and the United States.

"Step by step, we will clean our entire border," Erdogan said in a speech after the army announced the capture of Bursayah hill, which separates the Kurdish-held enclave of Afrin from the Turkey-controlled town of Azaz.

The hill is of great strategic importance as it grants Turkish forces an elevated area that overlooks the northeast of Afrin.

Read more: SOHR: 'Turkey supports anything that harms the Kurds'

Erdogan again vowed to expand the operation eastward, toward the town of Manbij.

"The terrorists in Afrin and Manbij cannot run from the painful end that awaits them," he said in a speech to party members in Corum province in northern Turkey. The crowd responded by chanting: "Hit, hit! Let it reverberate and let (US President Donald) Trump hear."

The move could further escalate tensions between Turkey and the US, which has been backing the Syrian Kurdish People's Protection Units (YPG) in other parts of Syria in the fight against "Islamic State."

Ankara views the YPG as a terrorist group because of its links to Kurdish insurgents fighting in Turkey.

Earlier in the day, the Kurdish militia and the Syrian Observatory for Human Rights (SOHR) reported intense fighting on the Bursayah hill. The clashes followed intense bombing in the area.

The Turkish-backed forces, which have made only modest gains in the hilly terrain during the more than a week-long offensive, have been trying to capture the hill since the start of their campaign, but have been met with stiff resistance.

The troops managed to capture the hill, assisted by airstrikes, attack helicopters, armed drones and howitzers, the Turkish military said in a statement.

Rami Abdurrahman, head of the Britain-based SOHR, said the Turkish soldiers killed nearly a dozen Kurdish fighters in the offensive to seize the hill. 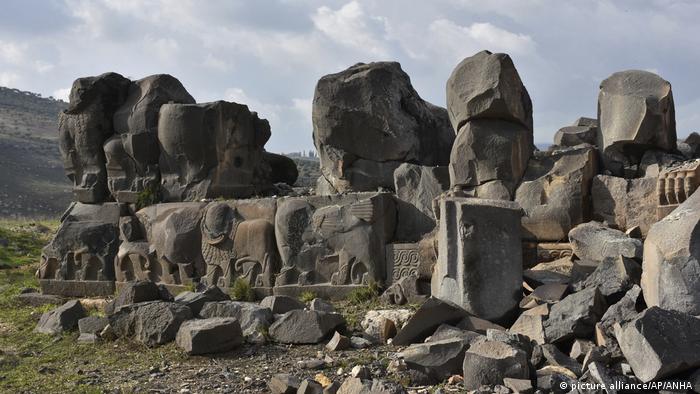 Images showed stones piled up in the open court of the temple of Ain Dara, an Iron Age Syro-Hittite temple, which dates back somewhere between the 10th and 8th century B.C.

The temple was renowned for its sculptures of lions and sphinxes and "the giant footsteps of the Gods," and for bearing structural similarities with Solomon's temple as described in the Bible.

Fresh images showed all the statues were destroyed.

The Syrian government antiquities department condemned the destruction of the temple.

"This attack reflects the hatred and barbarism of the Turkish regime against the Syrian identity and against the past, present and future of the Syrian people," a statement on its website said.

An anonymous Turkish military official said the airstrikes did not target religious or cultural sites. He added that the images were insufficient to determine the cause of the damage.